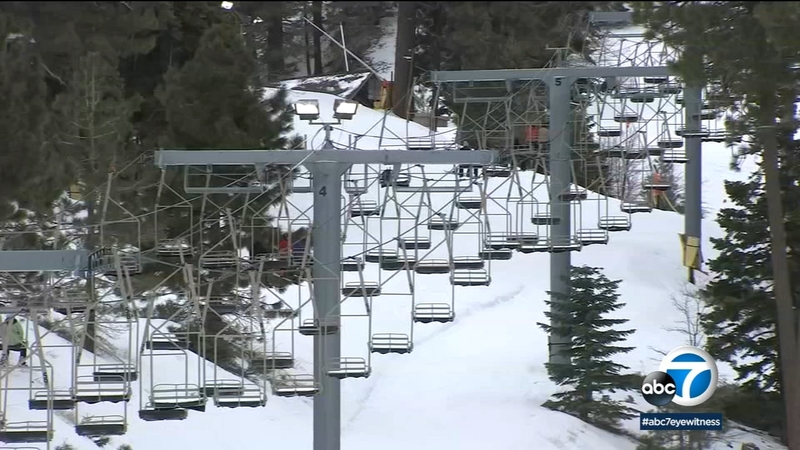 WRIGHTWOOD, Calif. (KABC) -- Some fresh snow could not come at a better time for ski resorts and other businesses in our local mountains right at the start of the weekend.

After a very dry January and February in the San Gabriel mountains, a late winter weather system is moving through. Up at Mountain High, they're hoping it will bring more snow as they continue their ski and snowboard season.

"At the top right now, we have about two, two and a half feet of snow, and then toward the bottom it's a foot, foot and a half," Mountain High spokesman Zach Longacre said. "There are some thin spots, we're starting to get into spring skiing and spring conditions, but there is enough snow to keep us going."

Longacre says they are still seeing the benefits of those gigantic storms that came through the area before New Year's.

Although it wasn't snowing this morning, it was windy and chilly.

"You get to the top of the mountain, it's windy and cold and a little foggy, but down here it's not so bad, it's nice," skier Brian Collins

Rain and snow will be moving into Southern California on Friday, prompting a winter storm warning in the mountain areas and cold, rainy weather for the rest of the region.

As we approach spring, it is that time of year where the temperature swings can be dramatic.

"Couple of days ago I was in shorts and a T-shirt, it was about 90 degrees in the valley, so a little different," Collins said.

"Oh, I love the cold, I think it's great today," snowboarder Pauline said. "I was up here last week actually, and it was 14 degrees Celsius, it was hot as heck."

That's 57 degrees Fahrenheit, and that was before the hot weather earlier this week when it was close to 70 degrees up in the mountains.

"Super, super hot, you know, we thought all the snow was going to be gone." snowboarder Daniel said. "I was talking to the ladies inside and they were saying, you know, they're expecting it's going to last for this month pretty much, not much more, so, you know, just hoping it lasts as long as possible."

Over in Big Bear Lake not a lot of snow fell on Thursday, only about an inch on the ground, but all the major ski and snowboard resorts are still going strong.