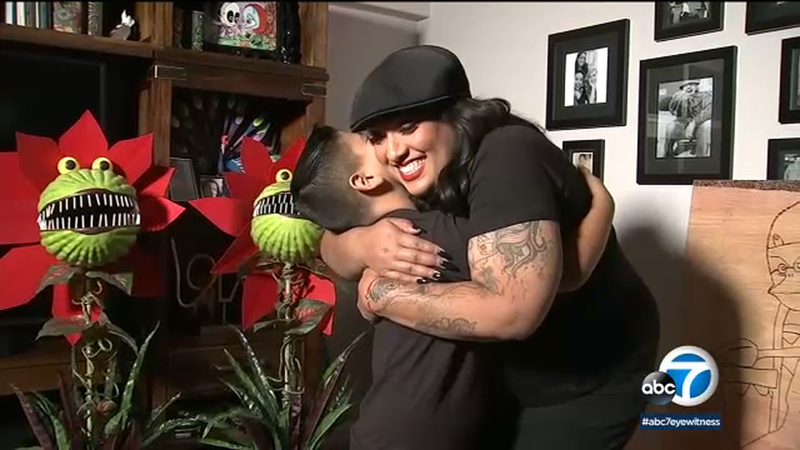 DOWNEY, Calif. (KABC) -- A Downey family have their Christmas spirit back thanks to a letter written by a 9-year-old boy.

Each year, for the past four years, Nickole Jones and her family set up an elaborate display in the front yard of their Downey home. The theme: "The Nightmare before Christmas."

They've won city awards and have captured the attention of all ages.

But last year, the nightmare truly hit home when someone stole their decorations. The suspect was caught on security camera, but never identified.

"I was really, really angry and surprised someone would do something like that at Christmas time," said Jones, a hair stylist.

Jones says she was so upset, her family decided not to put up a display this year, until she received a letter in the mail.

The letter began: "Dear neighbors. Me and my family have a tradition going to your house and seeing the decorations. But ever since those people stole your decorations I have been very sad."

The letter was written by 9-year-old Santiago Macias who has stopped by Jones' display for the past four years.

"I love the music. I love all the decorations, I just loved everything," said Macias, a fourth grade student at Old River School in Downey.

Macias enclosed $20 with the letter. He says it was to help remake the decorations.

"I think you should not stop decorating because I love your house and I know children love it too," Macias wrote in his letter.

"Instantly something clicked in my head," said Jones. "We have to do this even if it's just for him. We're doing it."

Jones managed to track down the fourth grade student and invited him and his mother over to her home to look at some of the decorations up close.

"I was really happy," said Macias. "I was excited just to go see it."

Jones says it can take two to three days to create some of her pieces. She plans to have the final display finished by Dec. 2.

That's the day she promised Macias it would be lit up and ready - with even more characters than ever before.

"He gave us back our Christmas spirit for sure," said Jones with a huge smile.

"He reminded me why we did it," she said. "And then it made me think we can't let those people who took the stuff ruin it, when it's making people happy."
Report a correction or typo
Related topics:
societydowneylos angeles countychildrenchristmascommunity
Copyright © 2021 KABC-TV. All Rights Reserved.
TOP STORIES
2 men dead after fire at Canoga Park marijuana grow operation
Mark Ridley-Thomas to surrender Wednesday ahead of arraignment
Record number of container ships waiting to enter SoCal ports
Boston-bound jet crashes on takeoff west of Houston with 21 on board
Hemet police officer punches suspect in confrontation seen on video
California now only state at 'moderate' COVID transmission level
LA County urges public to avoid high-risk Halloween activities
Show More
No charges will be filed against former UFC champ Chuck Liddell
CA vacation home renters targeted with threat, vandalism
US expected to authorize mix-and-match COVID booster shots
Gabby Petito's parents speak out about Brian Laundrie
Down 2-0, Dodgers have Braves where they want them at home
More TOP STORIES News