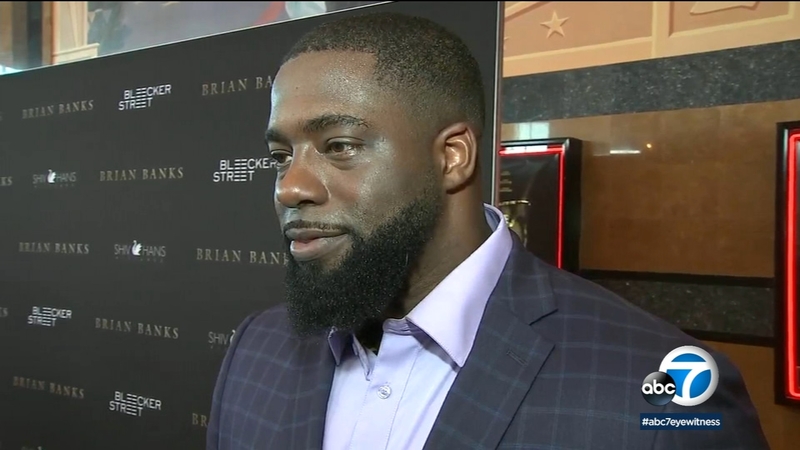 LONG BEACH, Calif. (KABC) -- A special movie screening was held in Long Beach for the showing of "Brian Banks," the life story of a standout high school football player, who was wrongly convicted of rape.

The film follows the journey of Brian Banks. In 2002, the All-American football star on his way to USC on a full scholarship, was falsely accused of raping a classmate, Wanetta Gibson, at Long Beach Polytechnic High.

Actor Greg Kinnear plays Jason Brooks of the California Innocence Project, which helped get the conviction overturned in 2012 after Banks spent five years in prison and another five on parole.

Actor Aldis Hodge plays Banks. Hodge says he spent a lot of time with Banks to get the role down.

Director Tom Shadyac says he was drawn to the story.

"His inspiration, his perseverance moved me," Shadyac said.

"He could imagine light at the end of the tunnel when there was none to be seen," writer Doug Atchison said.

Actress Sherri Shepherd plays Banks' mother, the person who gave him strength while in prison.

"She wrote him a letter every day. He will tell you his mother was his everything," said Shepherd.

Banks would go on to fulfill his dream of playing in the NFL. He played four preseason games with the Atlanta Falcons before being released in 2013.

Asked about what he thinks about Gibson, the woman who lied and sent him to prison, Banks said he has no feelings at all.

"No one deserves that much power over your life," Banks said.