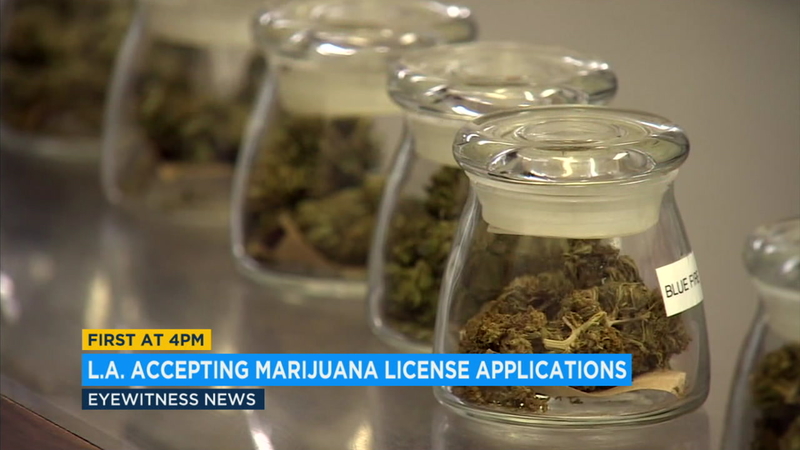 The start of the process arrived with a mix of relief and anxiety from businesses that have been waiting since Jan. 1, when California broadly legalized cannabis for adults, to enter the legal economy.

"We've been hanging on by the skin of our teeth," said retailer and cultivator Donnie Anderson, who has been paying thousands of dollars of rent for months on commercial space he hasn't been able to use without a cultivation license.

Los Angeles was once expected to be a showcase for the state's legal pot economy, but it has moved cautiously with licensing and its market has developed more slowly than in San Diego, Oakland and other major cities.

So far, LA has only licensed about 150 retail shops, with the rest of the supply chain in limbo.

Across the state, the effort to transform the long-established pot industry, much of it illegal, into a multibillion-dollar, regulated marketplace has been uneven at best. Illegal sales continue to flourish, undercutting legal shops, while there are widespread complaints about hefty taxes on purchases and growing.

Local governments are permitted to outlaw commercial cannabis activity, so the availability of legal pot depends on where a customer is trying to make a purchase. Initial tax collections by the state fell far short of initial projections.

It's also not clear when the first cultivation licenses for recreational pot will be issued by the city. LA's top pot regulator, Cat Packer, said last month the city didn't want to commit to a timeline because rules continue to change as the new system is refined.

Industry insiders have warned that delays in licensing threaten the marijuana supply chain, which could collapse and leave store shelves depleted.

In Los Angeles, retailers have turned to Northern and Central California to bring in products from licensed operators. Under state law, licensed retailers can only do business with other licensed companies.

Without licensed growers and manufacturers in LA, "the retailers have had to figure out new supply relationships with licensees across the state," Lachant said.
Report a correction or typo
Related topics:
societylos angeleslos angeles countymarijuanacannabis watchrecreationlegaldrugs
Copyright © 2021 by The Associated Press. All Rights Reserved.
More Videos
From CNN Newsource affiliates
TOP STORIES