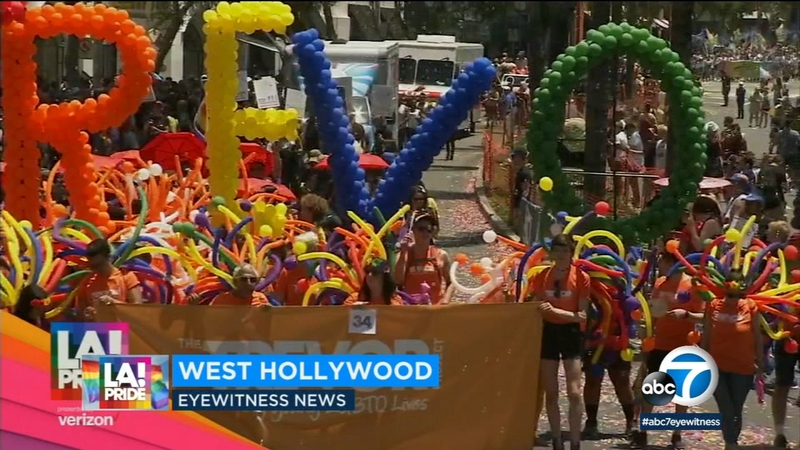 The parade started at 11 a.m. and traveled down a nearly two-mile stretch on Santa Monica Boulevard from Crescent Heights Boulevard to just past Robertson Boulevard. About 140 floats and dozens of groups and organizations marched in the parade, including the Gay Freedom Band of Los Angeles which performed "Dancing Queen."

The Gay Freedom Band of Los Angeles has appeared in almost every L.A. Pride Parade since 1978. On Sunday, they performed "Dancing Queen."

The parade was the culmination of the celebration, with the theme of "Just Unite."

The daughter of Eyewitness News' David Ono had a touching definition of what "pride" meant to her.

Oscar-winning actress Halle Berry was spotted along the parade route, where she showed her support for the LGBTQ+ community.

Oscar-winning actress Halle Berry was spotted along the parade route, where she showed her support for the LGBTQ+ community.

Aside from the parade, guests also attended "Pride on the Boulevard" where there was exhibitors, local artist performances, DJ's, beer gardens, rides and attractions, and a health and wellness fair located along Santa Monica Boulevard between Robertson Boulevard and Hancock Avenue.

Check out abc7.com/pride for stories about the LGBTQ+ community and their allies, and share your Pride with #abc7pride.

ABC7 is proud to be the broadcast partner for the L.A. Pride Parade.