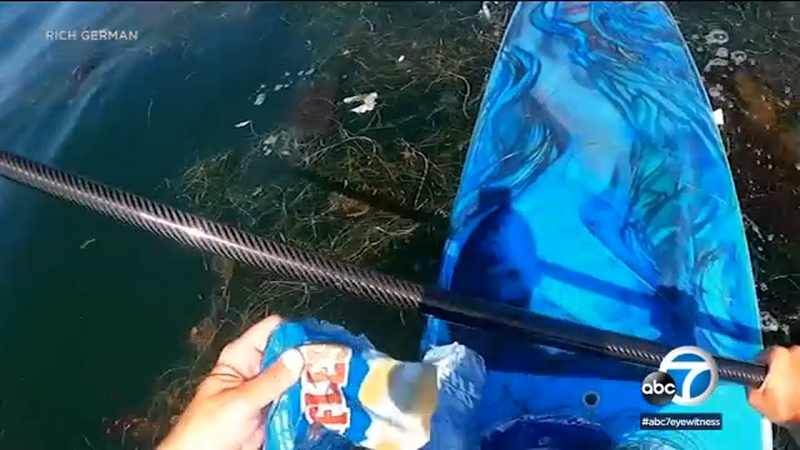 LAGUNA BEACH, Calif. (KABC) -- For the last 12 years, Rich German has paddled out into the Pacific Ocean off the coast of Laguna Beach to photograph dolphins and whales playing and migrating in the water.

"But lately I've been seeing something different which I'm not used to seeing, at least not as much as lately, and that is a ton of plastic and trash," German said.

His camera was rolling as he fished for bags and cups within the kelp forest.

"I just knelt down and I picked up as much as I could and honestly I didn't feel like I made a dent at all," German said, adding, "and what I'm seeing when I'm out there is obviously what's on top of the water and I can only imagine if you were to go down. It's just gonna go down all the way to the bottom."

Two minutes later. a pod of dolphins showed up.

One of the reasons why local lawmakers want to federally protect these areas is to make them more accessible for communities of color who live in nature-deprived areas.

"My heart literally just felt broken just thinking about the damage that we've caused to their home and I wanted to do something about it," German said.

That action is the Laguna Kelp Cleanup, which launched weekend before World Oceans Day.

More than a dozen nonprofits teamed up over the weekend with German to encourage people to paddle out and make a difference.

According to German, the Bay Foundation donated a square foot of kelp for the first 50 volunteers who showed up to the cleanup. The 50 square feet of kelp will be planted off the coast of L.A. County as part of the nonprofit's SeaTrees project.

"We're gonna have boards and kayaks here to let people borrow, so they can be a part of it and again if people aren't comfortable going out in the ocean, they can just walk onto one of the beaches and collect as much as they can," German said.

German hoped to bring awareness to this growing threat to our environment.

"Plastic pollution is not just a problem on the other side of the world. It's happening right here in our backyard paradise," German said.

Most Californians live a short drive from the coast, yet many take this precious resource for granted. This unique coastline is part of what makes the Golden State so special.