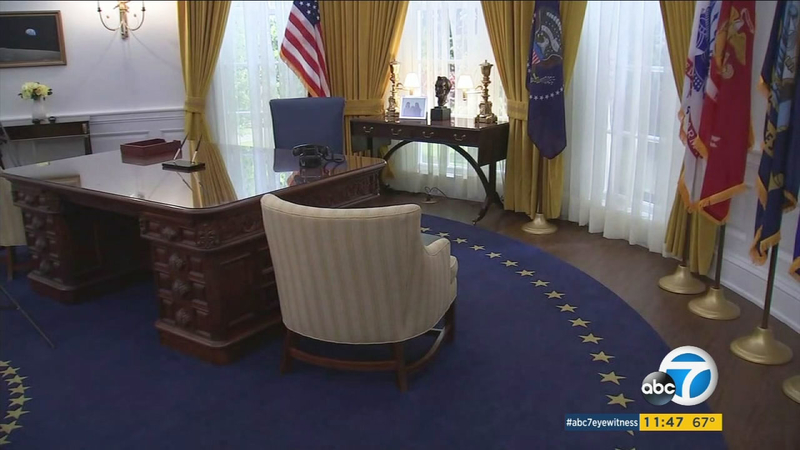 YORBA LINDA, Calif. (KABC) -- The Richard Nixon Presidential Library and Museum in Yorba Linda reopened on Friday after a yearlong closure to undergo a $15 million makeover.

One new feature for visitors is an exact replica of the 1960s Oval Office, where guests can actually sit in the former president's chair and lounge on the couches, said Joe Lopez, a museum representative.


The rug in the replica Oval Office was designed by former first lady Pat Nixon, who incorporated a deep blue and gold color combination, Lopez said.

"Every little detail in this Oval Office is how President Nixon had it," Lopez said.

The office also showcases a replica of the "Wilson desk," which is the desk that Nixon used as vice president and is currently being used by Vice President Joe Biden, Lopez said.

Also on display is the actual telephone that Nixon used to call Buzz Aldrin and Neil Armstrong from the Oval Office to the moon. The green phone is encased in a box alongside a piece of moon rock.

In addition, there are exhibits that detail historical key points within the Nixon administration, including Nixon's visit to China and his involvement in ending the Cold War.

"He had the courage and the vision to open to China and to put before the American people a new vision of world order," said former Secretary of State Henry Kissinger, who attended the grand reopening.

The maze of historical artifacts does not shy away from the Watergate scandal and Nixon's resignation.

"There's an entire gallery that takes visitors through the timeline of the Watergate events, and that ends in his resignation," Lopez said.
The museum also follows the former president's home life. The campus includes the house where Nixon was born and his final resting place.

The grand reopening ceremony, which was open to the public, featured Nixon's family members as well as former California Gov. Pete Wilson.

"I think it's an extraordinarily candid and very, very compelling telling of the good and the bad," Wilson said.