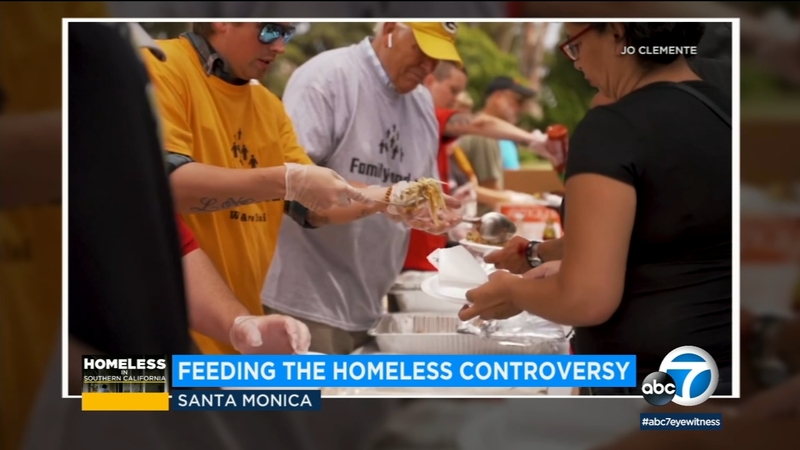 SANTA MONICA, Calif. (KABC) -- A man and his organization that works to feed homeless people in a Santa Monica park is butting heads with the city who wants him to change locations.

Back in May of last year, Steve Petramale was at Santa Monica's Reed Park with his then 11-year-old son who noticed a dozen homeless people in the park who looked hungry.

His son wanted to feed the homeless so every Sunday for a over a year, that's what the Petramales have done.

Petramale makes everything from pizza and ribs, to beef brisket and Brazilian chicken stroganoff, all out of his own pocket.

The Santa Monica resident launched the organization Family Food.us and feeds over a hundred homeless people each week.

The city of Santa Monica supports Petramale's work, but they don't feel the park is the best location.

"Neighbors are concerned about the amount of people, the lack of play space, the lack of space to be able to stretch out or have their various activities," said Alisa Orduna, the Senior Advisor on Homelessness to Santa Monica's City Manager.

Petramale is also facing another problem. In a letter from City Manager Rick Cole, he was told that the hot meals violate state, county and city regulations for temporary food facilities in public spaces.

Orduna said the fact that people return to get food every weekend is a concern when their homeless status isn't changing.

"There's so many resources now for homelessness and here's a missed opportunity," said Orduna.

The city has suggested other locations in Santa Monica for Family Food.us.

Petramale said he checked out two of their suggestions. One was a Salvation Army and he was told he couldn't be accommodated.

The other location was a social services organization, called Step Up on Second.

Although Family Food.us says they'll be in Reed Park this Sunday, the city of Santa Monica says that if they set up shop, they'll receive a citation for misdemeanor violations.