Stranded Riverside hiker meets dispatcher who helped save his life 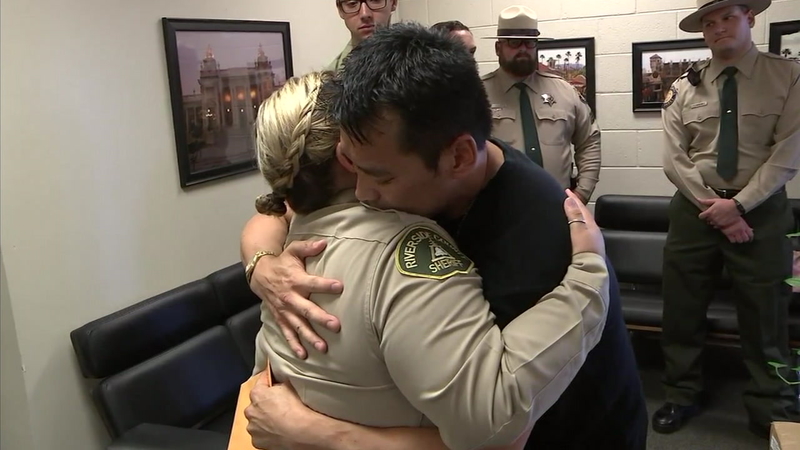 Stranded IE hiker meets dispatcher who helped save his life

RIVERSIDE, Calif. (KABC) -- John Duczakowski was on a hike on Mt. San Jacinto in early August at high elevation and warm temperatures.

His friend, 50-year-old Sean Planck, who had been walking ahead of him, disappeared.

When Duczakowski finally found him, he was on the ground. His friend was dead.

"The scariest thing is when I took his sunglasses off, his eyes had already rolled in the back of his head, and he was all yellow and pale," Duczakowski said.

That's when panic set in.

He successfully texted 911, but was not able to get a phone call through.

It took about an hour of him wandering around before his phone finally connected to Riverside County Sheriff's dispatch.

"I'm dying," Duczakowski is heard on the call telling Iniguez.

"He was completely out of breath and afraid," Iniguez said.

At one point, he stopped talking completely. Even though supervisors were advising she hang up the call to preserve the remaining battery life on his phone, she didn't hang up.

It was nearly 15 minutes until she heard him again.

"And I heard just the smallest breaths, and I told him you're doing great," Iniguez said. "They're almost there to you."

Three weeks later, surrounded by park rangers who were there that day, Duczakowski was able to meet the dispatcher who wouldn't let him go.

"Oh my God, you saved my life," Duczakowski said as he hugged Iniguez.

Duczakowski said he thought he was dying when his body was shutting down.