Congratulations, Duchess Meghan! Things to know about the American royal and mom-to-be

Meghan Markle, an American actress, married Prince Harry in May. The couple leaves Tuesday for a two-week-long trip to Australia, Fiji, the Kingdom of Tonga and New Zealand.

Meghan and Harry's two-day trip to Dublin was full of adorable moments, including Harry playfully scolding a toddler who played with the duchess' hair.

Here are seven things to know about the royal mom-to-be.

Her full maiden name was Rachel Meghan Markle. She grew up in the Los Angeles area, where she attended Catholic school.

Her father, Thomas Markle, was a Hollywood lighting director, and her mother, Doria Ragland, a yoga instructor and psychotherapist. Her parents split when she was young.

Her parents released a joint statement after her engagement announcement, saying:

Markle, who is biracial, penned an essay about her experiences for Elle Magazine in 2015, writing, "'What are you?' A question I get asked every week of my life, often every day."

She attended Northwestern University, where she graduated from the School of Communication in 2003. Markle was also a member of the Kappa Kappa Gamma sorority.

Markle returned to Northwestern for a visit in 2014, when she reminisced, "The 24-hour Burger King also definitely helped me put on the Freshman Fifteen."

The duchess was known as a trendsetter even before she was a duchess. And it's a good thing, too, because as a member of the royal family everything she wears has the potential to make headlines.


She is also a fashion designer who has launched an accessible line.

As an actress, Markle is best known for her role as Rachel Zane on the show Suits. Her other projects include Horrible Bosses, Remember Me and Anti-Social.

She is also a writer and served as editor-in-chief of the lifestyle brand The Tig, which is no longer publishing.

Outside her career and relationship, Markle is also known for her humanitarian work and for her activism.

In March of 2017, she wrote an essay called "How Periods Affect Potential," based on her time as a World Vision ambassador in India.

When it comes to women's rights, Markle is not afraid to speak out.

Her relationship with Prince Harry

From a stunning wedding dress to a moving sermon, these were the standout moments from the royal wedding.

Markle opened up to Vanity Fair for their October cover story, saying the pair were very happy but wanted to keep other details private.

"We're in love. I'm sure there will be a time when we will have to come forward and present ourselves and have stories to tell, but I hope what people will understand is that this is our time," she said. "This is for us. It's part of what makes it so special, that it's just ours. But we're happy. Personally, I love a great love story." 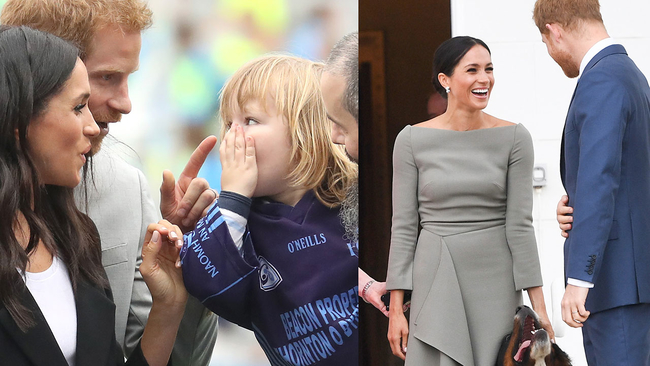 Meghan Markle gets coat of arms approved by the queen