KABC
By Marc Cota-Robles and Leanne Suter
LOS ANGELES (KABC) -- Thousands of people hit the streets of Hollywood on Tuesday morning to mark the 103rd anniversary of the 1915 Armenian genocide, and a massive afternoon rally was held in the Fairfax District.

The march was one of two local gatherings slated for Tuesday. The first event, organized by Unified Young Armenians, began at Hollywood Boulevard and Western Avenue in Little Armenia around 10 a.m. As in previous years, tens of thousands gathered to march through the streets of Hollywood.

Among them was David Ter-Petrosyan.

"It's like a big part of our soul taken from us, you know?" Ter-Petrosyan said. "To think about our ancestors being murdered and killed in crazy ways like that - being hung, burned to death.

"Most countries have recognized it besides America," he added. "And it's not fair because we have such a large Armenian community here in America."

Dozens of members of the Armenian community gathered in Montebello on Sunday to remember the Armenian Genocide.

The second event, the annual March for Justice, began at Pan Pacific Park in the Fairfax District shortly after noon. Mayor Eric Garcetti and Councilman Paul Koretz were among the dignitaries who addressed the massive crowd.

The march made its way through Mid-City and ended at the Turkish consulate on Wilshire Boulevard.

LAPD officials said all streets affected by the march will be closed until 6 p.m.

The marches mark the 103rd anniversary of the Armenian genocide, which claimed as many as 1.5 million Armenian lives under the Ottoman Turkish government. Present-day Turkey insists that the genocide did not happen.

At the Hollywood and Fairfax District events, Armenians and their supporters carried flags and signs, denouncing the genocide and calling on the United States to officially recognize it.

In the evening, a special screening of a documentary on the atrocity played at the Alex Theatre in Glendale.

More than 200,000 people of Armenian descent live in Los Angeles County, making the Southland home to the largest Armenian community outside of Armenia. 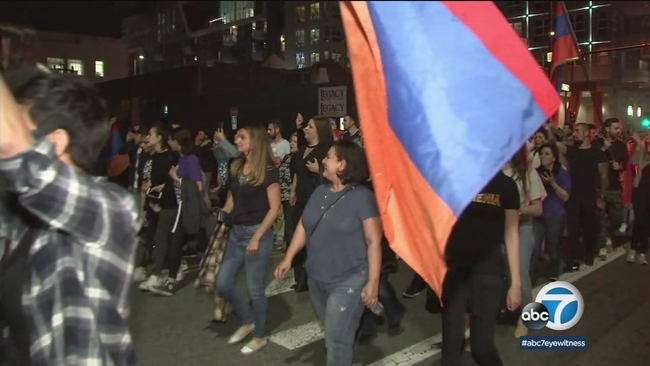 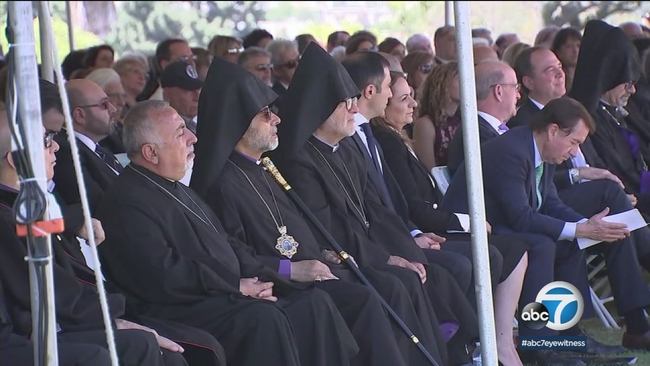