Sweet surprise! BTS super fan who was working to buy tickets gets free entry thanks to SoFi Stadium

To celebrate SoFi Stadium's one millionth ticket sold, SoFi gave this BTS super fan the surprise of a lifetime.
KABC 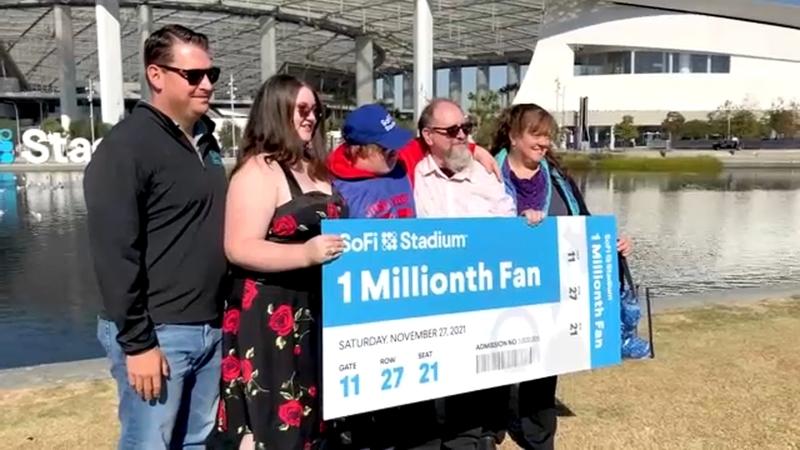 INGLEWOOD (KABC) -- Imagine being a super fan of one the world's most famous Korean pop groups and then getting free tickets to one of their sold out shows.

That wasn't just a dream for one Southern California teen. It totally happened!

To celebrate SoFi Stadium's one millionth ticket sold since it opened more than a year ago, SoFi gave BTS super fan Harrison free tickets to the group's sold out show on Saturday.

Photos of the sweet surprise were posted on SoFi Stadium's social media platforms, including Facebook and Twitter. The teen reportedly had been working hard to buy the tickets for himself, but now, he won't have to worry.

This Saturday at the @bts_bighit concert, we are issuing our 1 Millionth ticket to enthusiastic BTS superfan, Harrison making him SoFi Stadium’s 1 millionth fan. 🎟️ Congrats Harrison, we can't wait for you to see the show! #SoFiStadium #BTSSoFiStadium pic.twitter.com/YughexLMdw

The tweet of his photos has been shared more than 33,000 times.

Not only will Harrison get to see his favorite group perform, he'll also be decked out in free BTS merchandise and more.

BTS was crowned artist of the year at the American Music Awards on Sunday, so it's safe to say Harrison will definitely have the time of his life.