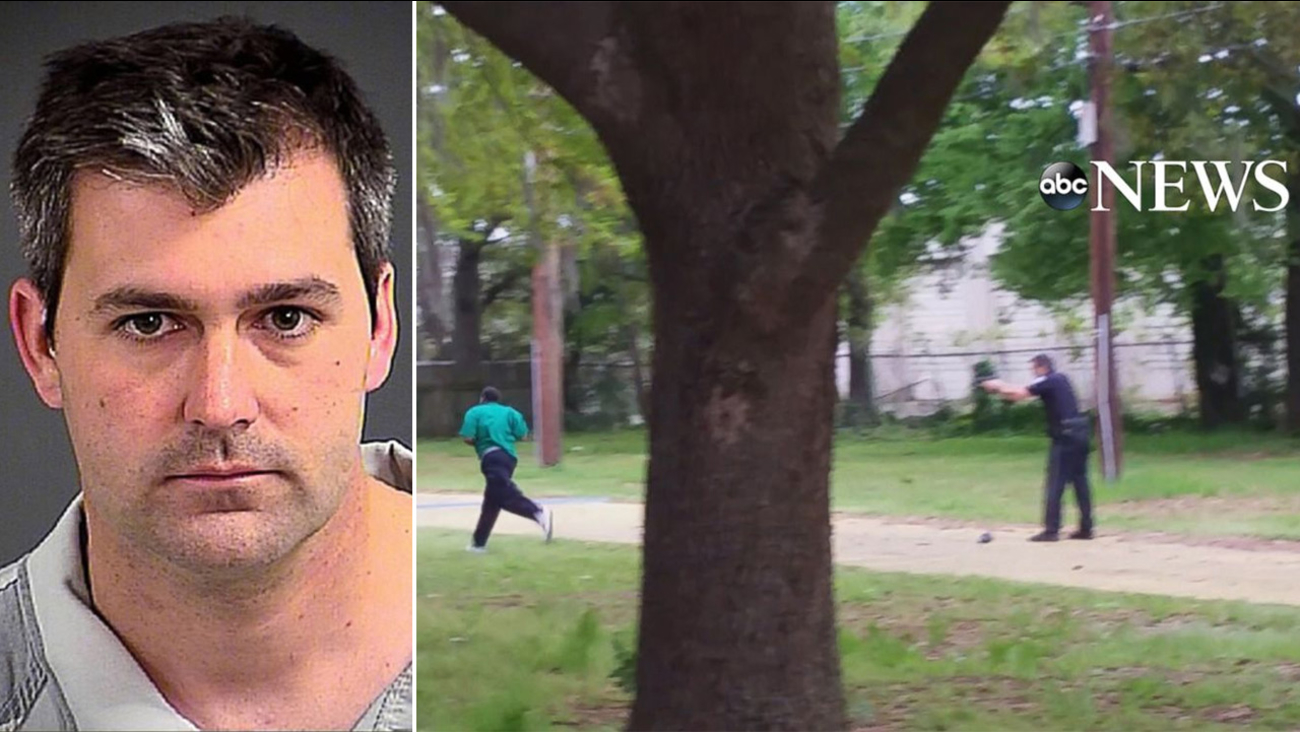 South Carolina Officer Michael Slager (left) was charged with murder after a bystander's video recorded him firing eight shots at an unarmed man's back as he ran away. (Charleston County Sheriff's Office / ABC News / handout from family)

NORTH CHARLESTON, S.C. -- A white former North Charleston police officer was indicted on a murder charge Monday in the fatal shooting of an unarmed black man who was running away from the officer after a traffic stop.

The shooting April 4 was captured on video by a bystander and showed officer Michael Slager firing eight times as 50-year-old Walter Scott ran away. The shooting rekindled an ongoing national debate about the treatment of black suspects at the hands of white officers.

"The jury will make up its own mind after it sees the video and hears the other testimony," Wilson said of Slager's trial.

No trial date has been set.

Wilson said the state law enforcement agents had the video and could have shown it to the grand jury, but she is not sure if they did. In South Carolina, the investigating agency typically presents the case to a grand jury, not the prosecutor.

Wilson said earlier the death penalty does not seem to apply because there were no aggravating circumstances such as robbery or kidnapping as required under South Carolina law.

The 33-year-old Slager faces 30 years to life in prison if convicted. He has been jailed without bond since his arrest.

Slager told authorities that he fired his Taser at Scott as he ran, but the stun gun didn't work. Then during a scuffle over the weapon, Slager said, he shot Scott with his handgun in self-defense. The video appeared to show the men briefly scuffling in a vacant lot, but it also shows Scott clearly running away when the officer starts firing his handgun.

Family members have said Scott may have started running after the traffic stop because he was fearful of returning to jail over about $18,000 he owed in late child-support payments.

As word of the shooting spread, many feared police would close the case without taking any action against the officer. But days later, the video shot by a man walking to work surfaced, and Slager was arrested, easing tensions in the community.

The cellphone video added fuel to the national debate about race and aggressive police tactics that intensified in August with the shooting death of Michael Brown in Ferguson, Missouri. In that case, there was no video of the shooting and Officer Darren Wilson was not indicted.

In Baltimore, six officers were indicted in the death of Freddie Gray, who was critically injured during an arrest there and later died at a hospital.

In South Carolina, prosecutors have sought felony charges against Slager and two other officers in the past year for shooting at unarmed black men following traffic stops. Two of the men were killed, while a third was seriously injured.