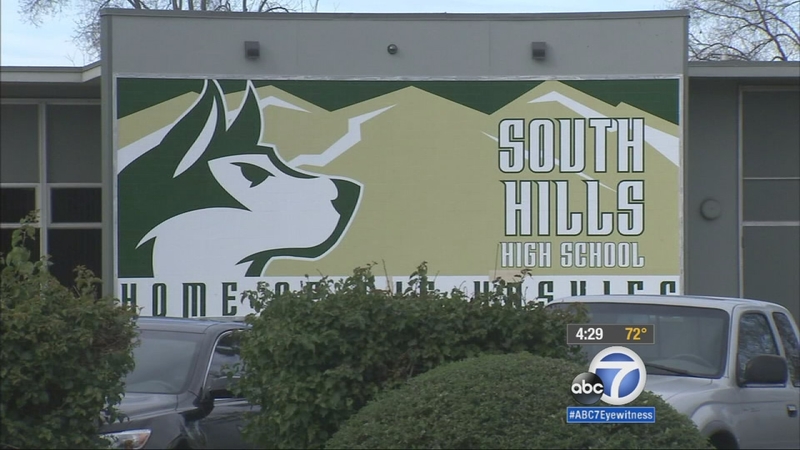 WEST COVINA, Calif. (KABC) -- A South Hills High School teacher has been placed on leave after he allegedly posted a message on social media about an investigation of fellow teachers accused of having sex with students.

Lippert and Ghirelli were arrested last weekend for allegedly having sex with underage students during camping trips to San Clemente State Beach.

A screen shot of Kane's Facebook post was obtained by the San Gabriel Valley Tribune. In the post, Kane questions why the male students involved "squealed."

"You should have kept your stupid mouths shut and enjoyed it," the post reads.

"It's the appearance of impropriety and probably condoning the behavior of the two teachers who are also out on administrative leave who were allegedly involved in sexual misconduct with students," Van Der Linden said.

The district is investigating what action, if any, needs to be taken about the post.

Lippert was arrested for conspiracy and contributing to the delinquency of a minor, and Ghirelli was arrested for oral copulation and unlawful sex with a minor. Both are on administrative leave pending the outcome of the criminal investigation.

The latest incident is just one of a string of problems for the Covina-Valley Unified School District.

A former South Hills student is suing the district and a South Hills teacher for allegedly being assaulted in class last spring. Eyewitness News learned the teacher is still working at the school.

Lippert and Ghirelli's arrests came nearly two weeks after the arrest of a part-time wrestling coach within the district. Anthony Vidales, 29, of Covina was arrested Jan. 7 on suspicion of a sex-related incident with a 17-year-old student. Vidales was a walk-on coach for the South Hills High School varsity girl's wrestling team. He has since posted $20,000 bail.

The Covina-Valley Unified School District is working with the school to establish a hotline for students so they can anonymously report inappropriate behavior by faculty and staff.