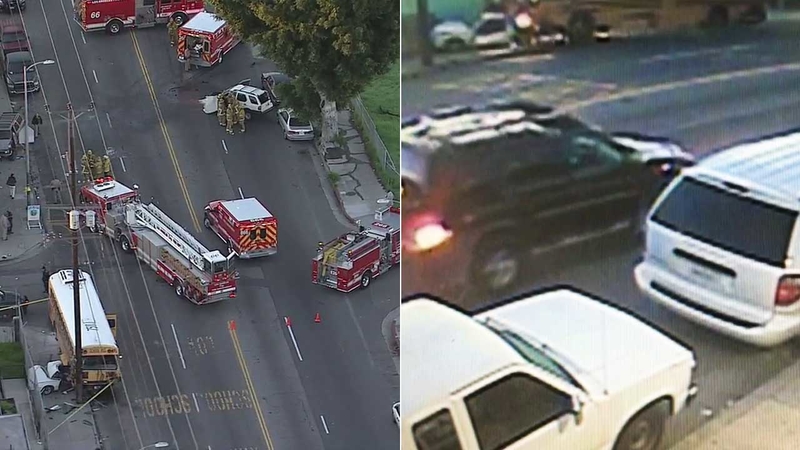 The video shows a white car stopped at an intersection. The driver makes a left turn onto Normandie Avenue, and an SUV is seen swerving to avoid a crash.

That SUV then loses control and slams into a school bus, which then hits two parked cars, dragging one along the street for about 50 feet. The bus ended up on the sidewalk, completely crushing the car, then coming to rest against a utility pole.

A violent crash involving a school bus in South Los Angeles was caught on camera.

Deon Jones, the owner of that mangled car, told Eyewitness News he was in his home when heard the crash.

"I came outside to see if my car was still in its right place, and it wasn't. So I looked down the street, and the bus decided to relocate my car across the street over here," Jones said.

Jones said he's thankful that he was not inside his car at the time of the collision.

"Thank you, Lord, for not me being in that car. That's what I was thinking. I was blessed not to be in the car," he said.

Authorities said seven teenagers were in the bus on their way to Mark Twain Middle School. The windows on the bus were shattered - but the students were not injured and all released to their parents.

Police said the school bus driver and a driver in one of the cars involved in the wreck were transported to an area hospital. Injuries to the bus driver were not known. Police said the other driver sustained non-life threatening injuries.

People who live and work in the area say collisions are common. Jones said drivers need to slow down.

"It is a busy street, and a lot of people kind of rush, speed down this street. Sometimes they use it like a race track," Jones said.