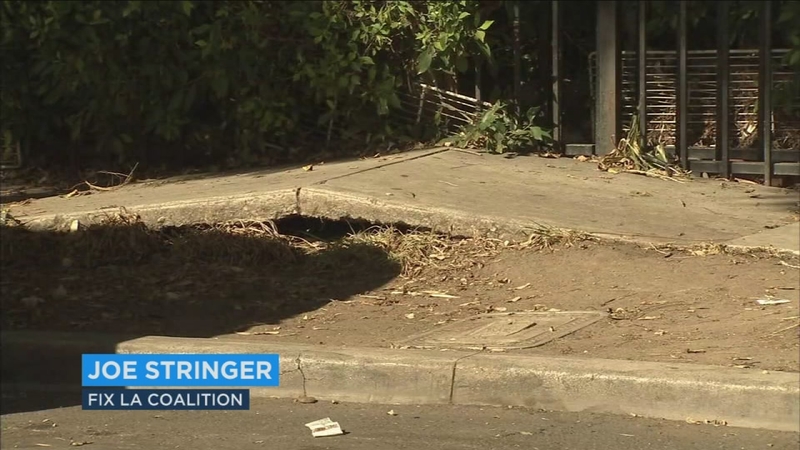 SOUTH LOS ANGELES (KABC) -- In some South Los Angeles neighborhoods, some residents say it's hard to tell if you're on a sidewalk or in a skate park.

The slabs of concrete are cracked and dangerous, according to some frustrated community members.

"There's hazards when you have trees and curbs that are lopsided and mothers can't even walk their children," said South L.A. Pastor William Smart

Members of the Fix LA Coalition and other community groups took the media out into some South L.A. neighborhoods, pointing out some of the worst problems.

They're putting the blame on Mayor Eric Garcetti.

"We've been promised over 5,000 jobs to be put into certain neighborhoods, into our neighborhoods to do these repairs," said Joe Stringer of the Fix LA Coalition.

The activist groups claimed roughly half those positions are funded, but the city has refused to start hiring.

The mayor's Press Secretary, Alex Comisar, responded in a statement, saying, "Mayor Garcetti is committed to making sure our sidewalks are safe and accessible for Angelenos."

"Since 2015, the City has completed sidewalk repairs at 690 locations, covering more than 50 miles. And in this year's budget, the Mayor invested more than $35 million of new spending in fixing streets and sidewalks, and making them safer," Comisar said.

Resident Sonia Galvez, who suffers from cerebral palsy, said she feels trapped in her home.