AIR7 HD captured the baby being safely rescued after the SUV was found in the city of Bell.
KABC 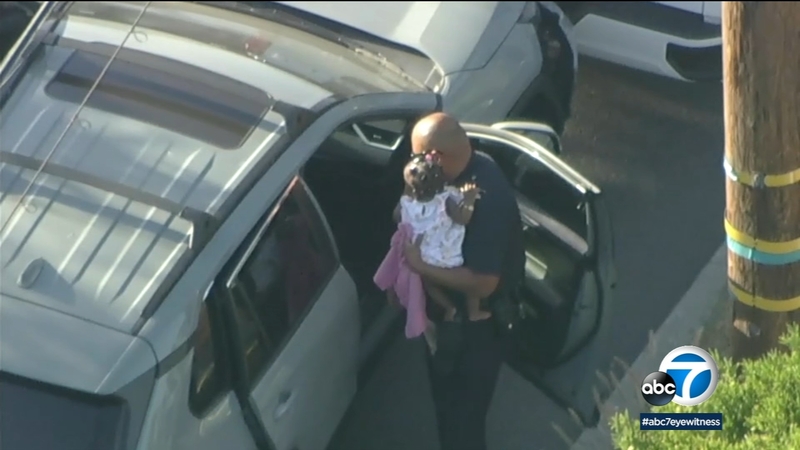 SOUTH LOS ANGELES (KABC) -- A woman has been arrested for allegedly trying to steal a mother's SUV in South Los Angeles with her baby still inside, authorities said.

According to police, the mother was driving near 110th Street and Wilmington Avenue in her Toyota RAV4 when she stopped due to a flat tire.

As she got out to check on it, the woman - who has not been identified - jumped into the SUV and took off, according to police.

The baby was in the backseat.

That's when the mother immediately called police and was able to monitor her vehicle's location through her cell phone, which was inside the SUV.

The vehicle with the baby inside was left abandoned near Fishburn Avenue and Randolph Street where the child was found safe.

"The child and mother were reunited at Southeast Station, and we are glad to report the child was in good spirits and unharmed," said LAPD in a statement.

Witnesses were able to point out the suspect's location, according to police.

The woman was found shortly after and taken into custody.

Police said she's in the process of being booked as of Wednesday night.

"The victim's quick-thinking in tracking her vehicle, coupled with the officer's relentless follow-up and community members pointing out the suspect, resulted in the arrest of a criminal, and more importantly, a mother being reunited with her child," said LAPD.