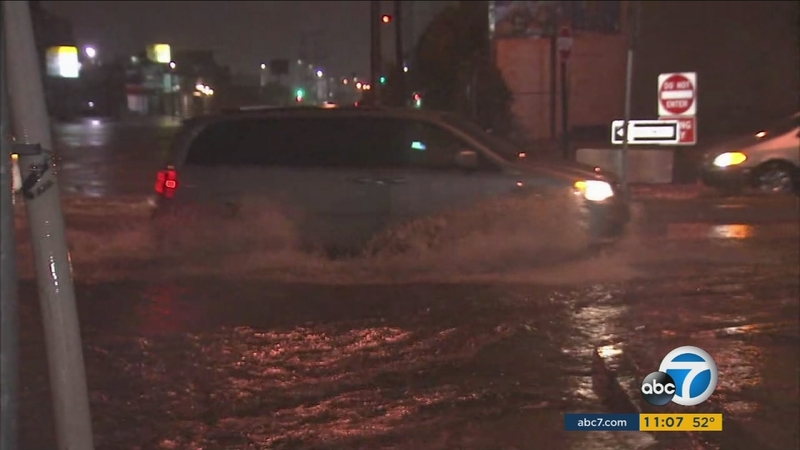 In Sun Valley, streets were flooded and residents were soaked. Slippery streets led to numerous car accidents in the area. Showers got so bad near downtown L.A., it caused several vehicles near Long Beach Boulevard and 50th Street to be stalled out in the high water.

Holiday travelers headed up and over the Grapevine also encountered some dangerous conditions. Even before temperatures dropped, heavy rains up the 5 Freeway left standing water on roadways. Then, as evening turned to night, rain turned to snow.

Travelers drove through heavy rain on slick roads along the Grapevine on Friday.

The National Weather Service issued a flash-flood warning at about 9 p.m. for the Old Burn Area in western Los Angeles County. Flash flooding with mud and debris flow was expected throughout the night.

By 11 p.m., Soledad Canyon Road was shut down just east of Agua Dulce Canyon Road in Soledad due to heavy debris.

MORE: Get weather alerts on watches and warnings throughout Southern California

As if traffic wasn't bad enough already because of a holiday weekend, factor in an early winter rainstorm and consequently, the 15 Freeway through the Cajon Pass is a mess.

Heavy rain falling in the Cajon Pass. It might turn into snow overnight. pic.twitter.com/B3CDnpnVSn

Caltrans snow plows were at the ready should rain turn to snow overnight in the Inland Empire.

MORE: Track the storm with the LIVE MEGADOPPLER 7000 HD


"Right now we have a crew sitting up on top of the pass at 15 and 395, waiting for the first snowflake so we can clear the roads so everyone can get home," said Jason Sadler of Caltrans.