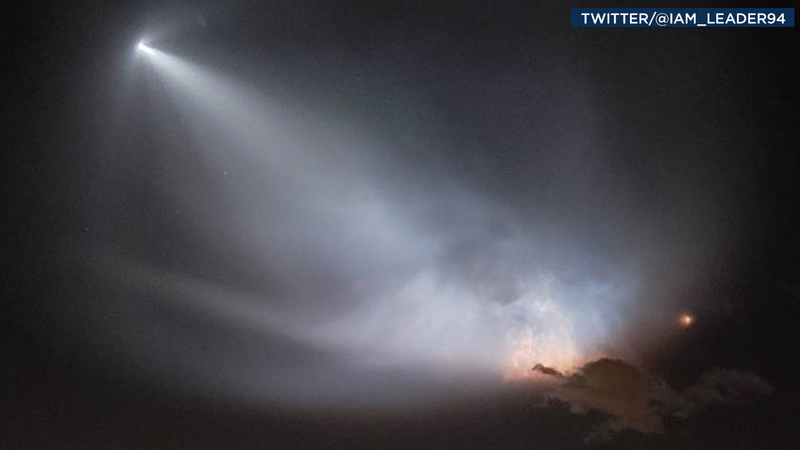 VANDENBERG AIR FORCE BASE, Calif. (KABC) -- SpaceX successfully launched and then landed a Falcon 9 rocket from Vandenberg Air Force Base that people from all over Southern California saw light up the sky.

The rocket launched at 7:21 p.m. from the Santa Barbara County base.

It had an Argentinian Earth-observation satellite aboard its Falcon 9 Rocket, and everything from the launch to deploying the satellite to landing the rocket happened within a 15 minute span.

It was the aerospace company's first landing on the West Coast.

The Air Force last week advised residents on the central California coast they might see multiple engine burns by the first stage and hear one or more sonic booms as it returned.

People all over the Southland and even as far as Arizona captured stunning videos and photos of the rocket as it shot through the atmosphere. It created a bright swirl of blue and white lights across the sky.

Many people who were at the Griffith Observatory were not expecting the launch.

"As we were seeing it go into space - the way it burst, it was just beautiful with all the colors and everything," one man said.

Visitors said they felt lucky to witness the launch at the observatory, especially since many of them had just walked out of the planetarium show.

"Right after we walked out, we saw this thing and we were like, 'Is this part of the show?' It freaked me out, too, because I thought the world was about to end," one man said.