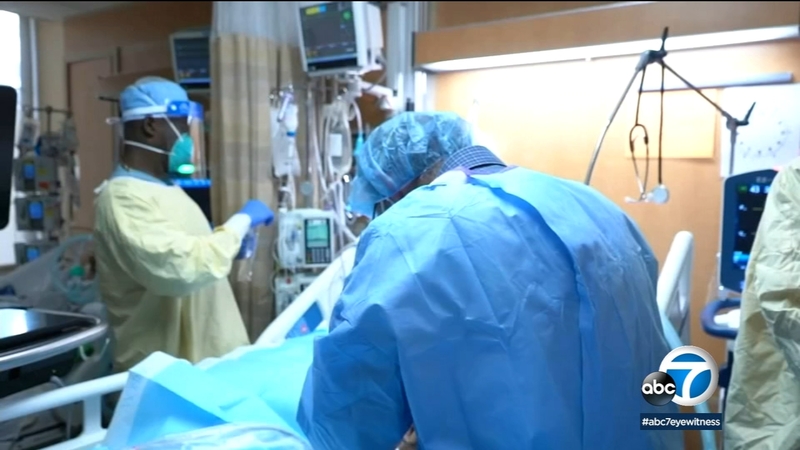 HAWTHORNE, Calif. (KABC) -- At least 132 workers at SpaceX headquarters in Hawthorne have been infected with COVID-19, according to new county data.

The county's latest compilation of coronavirus outbreaks at workplaces, excluding residential facilities, puts the rocket company at the top of the list, far ahead of the 85 cases at the FedEx facility near Los Angeles International Airport.

The list includes 37 Los Angeles County workplaces with a total of 452 cases.

The Hawthorne facility serves as both the company's headquarters, mission control and manufacturing for Falcon 9 rockets.

The company, however, noted that under the county's definition, the "current outbreak" at its Hawthorne facility actually represents a total of cases dating back to September, when an initial small outbreak was reported.

If a company has three or more cases in a 14-day period, it's added to the current outbreak list. To be removed from the list, a workplace has to have no new cases for two weeks - otherwise the aggregate numbers continue to add up and the outbreak is still considered current.

SpaceX released a statement that read in part:

"Of the 132 reported 'outbreak' cases, only one case was suspected to have occurred at work. 132 is also the aggregate number of cases reported since the September case described above, and that number includes employees who may have been on vacation for several weeks, returned to work and received a COVID test at SpaceX that turned out positive. Again, it does not mean 132 employees in Hawthorne have COVID today or contracted it in the workplace.

We will continue to work very hard to keep employees safe in the workplace."

It comes at a busy time for Elon Musk's company, which has had several major launches in recent weeks.

Last month, NASA launched a mission on a SpaceX rocket to smash into an asteroid and test whether it is possible to knock it off from a collision course toward Earth.

NASA launched a spacecraft Tuesday night on a mission to smash into an asteroid and test whether it would be possible to knock a speeding space rock off course if one were to threaten Earth.

COVID-19 cases are once again rising in California and throughout the country, amid increased holiday travel and gatherings, and the spread of the omicron variant. Los Angeles County recently reported its highest number of daily cases since August.

California this week is marking 75,000 deaths from COVID-19 since the start of the pandemic.

And health officials are concerned as omicron has now become the dominant strain of the coronavirus. Hospitals are reporting once again being strained to the limit of their resources as the holiday season gets underway, with increased transmission linked to family gatherings and air travel.

The TSA is expecting to screen some 30 million air passengers through the holidays.

Overall cases are up by some 96% in the United States since October. Omicron appears to be spreading faster than previous variants.

"It seems to be overtaking all the other variants, including delta, with a doubling time of about two to three days," said Dr. Anthony Fauci.

Cases are rising in children in particular, with 170,000 pediatric cases reported, up 28% in the last two weeks.