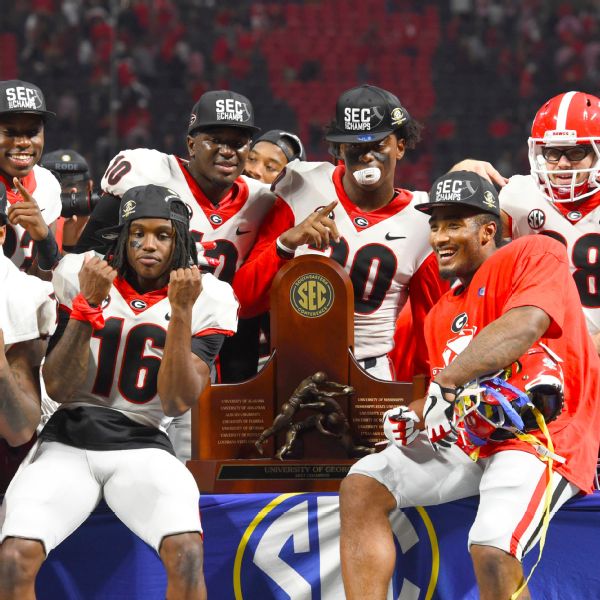 The 2017 New Year's Six have been established as bowl game announcements are underway.

With the announcement of the College Football Playoff teams -- No. 1 Clemson, No. 2 Oklahoma, No. 3 Georgia and No. 4 Alabama -- the semifinal games were decided upon.

Clemson and Alabama will play each other for the third time in Clemson's three playoff appearances -- and a rematch of the 2016 title game -- at the Sugar Bowl on Monday, Jan. 1 (8:45 p.m. ET on ESPN). Nick Saban's Tide will seek to avenge their title loss last year; since joining Alabama in 2007, Saban is 10-2 against teams he lost to the previous season (only LSU and Ole Miss have taken him down in consecutive seasons), according to ESPN Stats & Information.

Earlier on New Year's Day, Georgia and Oklahoma will fight for a spot in the title game at the Rose Bowl (5 p.m. ET on ESPN). It's just the second time since 1920 that the Rose Bowl does not feature a Big Ten or Pac-12 team (Miami defeated Nebraska in the 2001 Rose Bowl), according to ESPN Stats & Information.

The winner of each playoff game will battle in the national championship game Monday, Jan. 8 (8 p.m. ET on ESPN).

The other New Year's Six matchups:

While it's Washington's first trip to the Fiesta Bowl, head coach Chris Petersen has won it twice before: with Boise State in 2007 and 2009. Penn State hasn't playing in the Fiesta Bowl since 1996.

UCF, finishing with a final ranking of 12, is the highest of any Group of 5 team in the four years of the CFP playoff. The Knights went undefeated in the regular season, finishing 12-0, but Auburn has a 72 percent chance of defeating UCF, per ESPN's Football Power Index.

USC and Ohio State are meeting for the eighth time in a bowl game, tied for the most bowl game matchups (with USC vs. Michigan) by a particular tandem in FBS history, according to ESPN Stats & Information.

Circle Dec. 28 for your ranked vs. ranked battles:

Florida State, led by interim coach Odell Haggins, will face Southern Mississippi in the Walk-On's Independence Bowl on Dec. 27. If FSU loses its bowl game and finishes below .500, it would mark just the eighth time a preseason top-3 team did so, according to ESPN Stats & Information.

The longest bowl drought in the nation will end when New Mexico State plays Utah State in the Arizona Bowl in Tucson on Dec. 29.

NMSU (6-6) became eligible with its 22-17 win over South Alabama on Saturday -- a day athletic director Mario Moccia called a "tremendous day for long-suffering Aggies fans.'' NMSU also was eligible for a bowl in 2002, when it went 7-5, but it did not receive an invitation.

With NMSU, UAB and Florida Atlantic going bowling, the longest active bowl drought now belongs to Kansas, whose last appearance in a bowl game was the 2008 Insight Bowl, according to ESPN Stats & Information.