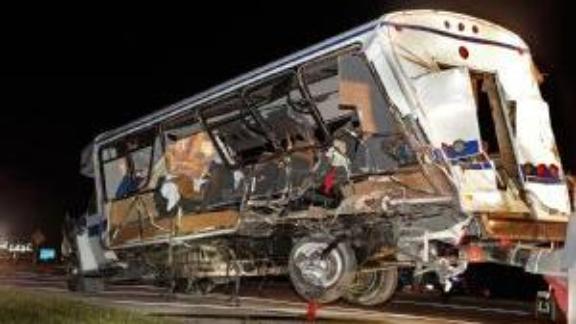 DAVIS, Okla. -- A tractor-trailer crossed a southern Oklahoma highway median and plowed into the side of a Texas college softball team's bus, killing four women on the team and injuring more than a dozen others, authorities said.

The collision involving the North Central Texas College team happened at around 9 p.m. Friday on Interstate 35 south of Davis, which is about 70 miles south of Oklahoma City and 60 miles north of Gainesville, Texas, where the school is located. The team was heading home from a scrimmage against Southern Nazarene University, in Bethany, the Oklahoman reported.

Oklahoma Highway Patrol Capt. Ronnie Hampton said the semi crossed the median and veered into the southbound lanes, striking the bus. He said three women from the team died at the scene and a fourth died at a hospital in nearby Sulphur. Authorities identified the victims Saturday as19-year-old Meagan Richardson, 20-year-old Brooke Deckard, 18-year-old Katelynn Woodlee and 20-year-old Jaiden Pelton.

According to a police report released Saturday, three women remain hospitalized in Oklahoma City and Norman. Eight other team members and the coach driving the bus were treated and released.

The front end of the team bus was virtually untouched, but the sides of the vehicle were heavily damaged. Troopers and witnesses said the driver's side of the bus sustained the worst damage.

Hampton said that after the truck struck the bus it kept going and went off the side of the road.

"We knew we had a two-vehicle accident by what we saw at the scene. ... But it took about an hour before we found the semi," he said.

The National Transportation Safety Board said Saturday that it was sending a team of investigators to the site.

"Right now, it's being investigated like a homicide," Hampton said, adding that both drivers will undergo standard toxicology tests. Hampton said details of the crash were still not known but "something happened to cause (the semi-tractor driver) to depart the roadway and impact the other vehicle."

He said the accident will remain under investigation for several weeks.

A posting on the North Central Texas College Facebook page reads: "We ask for your prayers at this time for our softball team. Their bus has been involved in an accident in Oklahoma." 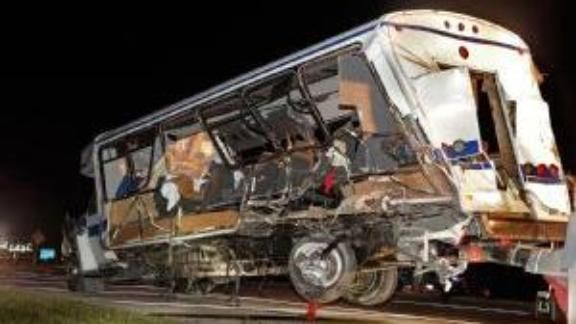