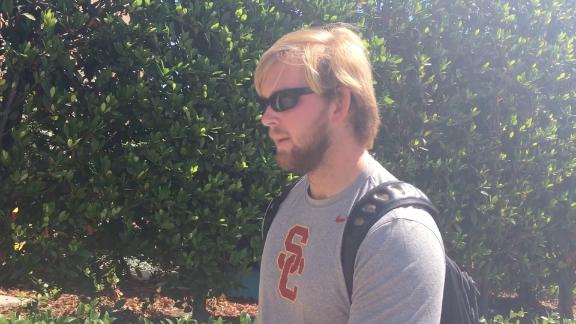 LOS ANGELES -- USC blind long-snapper Jake Olson captured the attention of college football fans all over the country on Saturday when he entered late in the Trojans' win against Western Michigan and snapped for a successful extra point. For Olson, it was the culmination of a long-time pursuit, but also represents what he hopes is the first of many opportunities to snap for a team that has been a big part of his life for several years.

Olson was born with retinoblastoma, a form of eye cancer, and lost his left eye when he was 10 months old. In 2009, at age 12, he learned he needed surgery to remove his right eye. During that time, he developed a close relationship with USC and on the night before he lost his vision for good, Olson took in a USC practice.

He spent two years as the starting varsity long-snapper on field goals and extra points at Orange Lutheran High in Southern California and in 2015 joined the team at USC as a walk-on.

Today, ESPN.com will document a day in the life of Jake Olson, who has agreed to let us hang around with him and he as he resumes his life as a student-athlete in the wake of his debut for the Trojans.


This Sunday on E:60, Shelley Smith goes back to the beginning to share the inspiring journey that led USC's Jake Olson to college football history. Sunday, September 10, 9 a.m. ET on ESPN2.