Adam Scott opens with 3-under 69 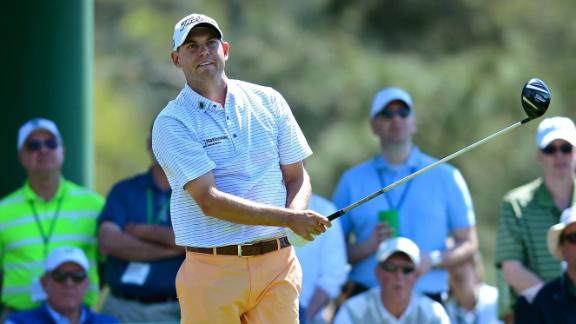 AUGUSTA, Ga. -- Playing Augusta National for the first time in competition as a Masters champion is something Adam Scott never will forget, especially the reaction he got from fans around the course during an opening-round 69 on Thursday.

"It was a thrill, really," said Scott, who trails leader Bill Haas by a stroke. "The reception into every green and almost every tee box was incredible, and the best one, the memory that will stick with me forever, was walking up the 12th tee and everyone getting out of their seats as I approached there. It was great.

"The level of respect that everyone has for this golf tournament and what happens here ... but then I went and hit it in the water."

He did, with his 9-iron approach from 158 yards finding Rae's Creek en route to a double-bogey 5.

But that was the only blemish on the scorecard for Scott, 33, who also had five birdies to match his opening-round score of a year ago, when he went on to win in a playoff over Angel Cabrera.

"I was really very happy with the way I played today tee to green," he said. "It was really how you would hope to come out and play at any major, and especially the Masters. I was really solid.

"I hit one poor shot on 12, which obviously cost me a couple of shots. But very pleased to get off to a good start, and there's no doubt winning the Masters last year had me a little more comfortable on the first tee than I've ever been in the past.

"I didn't have the legs shaking and nerves jangling for six or seven holes like usual, so that was enjoyable for me today. But I'm very pleased with my opening round."

Scott birdied the first, sixth, eighth and 10th holes to lead, then ran into trouble at the 12th. He got a stroke back with a birdie at the 14th but failed to birdie either par-5 on the back nine despite hitting both greens in two shots.

Scott, the only Aussie to win the Masters, begins his second round on Friday at 1:48 p.m. ET with PGA champion Jason Dufner and U.S. Amateur champion Matthew Fitzpatrick.