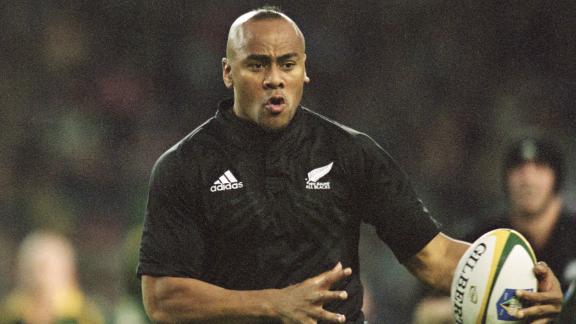 Jonah Lomu has died unexpectedly in the early hours of Wednesday.

The All Blacks legend, who had been in the United Kingdom to attend the Rugby World Cup on promotional duties, was 40 years old. He had arrived home in Auckland, after a stay in Dubai, only the day before.

Lomu scored 37 tries in 63 Tests and was regarded as one of New Zealand's greatest wingers. He quit rugby in 2002 because of Nephrotic syndrome, a rare kidney disease. He had been on dialysis treatment for more than a decade.

"We're all shocked and deeply saddened at the sudden death of Jonah Lomu," New Zealand Rugby chief executive Steve Tew said. "We're lost for words and our heartfelt sympathies go out to Jonah's family. Jonah was a legend of our game and loved by his many fans both here and around the world."

Lomu's wife, Nadene spoke in a brief statement about the family's devastating loss and asked for privacy, particularly for the couple's two children, Brayley and Dhyreille.

"It is with great sadness that I must announce my dear husband Jonah Lomu died last night," she said. "As you can imagine, this is a devastating loss for our family and may I ask that our privacy, especially the privacy of our two very young boys, be respected as we take them through this traumatic time."

"Jonah and his family arrived back from the United Kingdom last night and he suddenly died this morning," Mayhew said.

Prime Minister John Key, who is at the APEC summit in Manila, said he was "absolutely shocked" at the news of Lomu's passing, and Parliament has expressed its sadness and condolences.

People were seen arriving at Lomu's house to pay their respects.

Lomu's spectacular performances at the 1995 Rugby World Cup made him one of rugby's most recognisable figures, becoming the sport's first global icon.

His tackle-shredding displays included a stunning four-try demolition of England in the quarterfinals, where his trampling of fullback Mike Catt remains an indelible image.

Tew said: "Anybody of my generation will remember the World Cup game where he ran over a couple of guys in white shirts. A larger-than-life person, he was certainly a magnet for a lot of attention. He was the first big star of the game, certainly from our neck of the woods."

His performances in South Africa were said to have triggered the birth of professional rugby in 1996, with media moguls admiring the speed and power which contrasted with his gentle off-field demeanour.

World Rugby, the governing body, acknowledged the impact made by Lomu in a statement which described him as a "true legend of the game and a wonderful ambassador for the sport."

Chairman Bernard Lapasset said: "Rugby has lost one of its true greats. Not just one of the finest players ever to play the game, but a gentleman, a role model and an icon.

"Jonah's contribution to rugby cannot be overstated. He was the first superstar player and, through his sheer brilliance and love of the game, he brought much joy to the rugby family and took our sport to a new level of profile."

Lomu remains the joint record holder for the most World Cup tries -- he is tied with South African Bryan Habana on 15 -- and was recently named the tournament's greatest-ever player in an English-run poll.

After starring as a schoolboy No. 8, Auckland-born Lomu rose to prominence with a powerhouse display at the 1994 Hong Kong Sevens tournament. He then became the youngest-ever All Blacks player the same year when he featured on the left wing against France in Christchurch, aged 19 years 45 days.

Lomu made a shaky debut but soon established himself as a potent match-winner, his size and acceleration too much for most defenders to handle.

The former Blues, Hurricanes and Chiefs winger underwent a kidney transplant in 2004 and made a brief comeback attempt a year later.

Lomu was inducted into the International Rugby Board Hall of Fame in 2011.