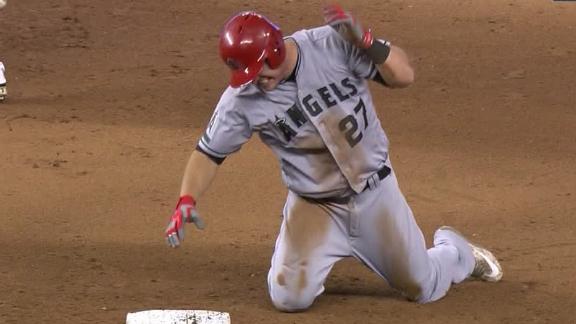 Mike Troutwill not play for the Los Angeles Angelson Monday night against theAtlanta Braves, but the team is still awaiting the results of Trout's MRI.

The Angels are hoping he avoids a trip to the disabled list after the star center fielder sprained his left thumb in Sunday's loss to the Miami Marlins.

X-rays taken on Trout's hand were negative for any fracture, according to the team.

"A scary thing," Trout said after Anaheim's 9-2 loss in Miami. "Hopefully it's just sore and just jammed, a bad jam.

"I'm obviously bummed out, but Monday if it feels a little better, we'll see how it goes."

Trout suffered the injury on a headfirst slide while trying to steal second base in the fifth inning. The reigning American League MVP jammed his thumb into the base and yelled in pain as he rose from the ground. He was examined by a trainer and stayed in the game, but was replaced in the sixth.

"It was definitely sore for sure," Trout said. "It was aching."

Angels manager Mike Scioscia acknowledged that Trout could miss a day or two but seemed optimistic that the five-time All-Star won't need to be placed on the DL for the first time in his career.

"The first indication is it just looks like a little sprain," Scioscia said.

Trout went 0-for-2 on Sunday and is batting .337, the second-highest average in the AL. He has 16 home runs -- tied with Yankees rookie Aaron Judge for the major league lead -- and is fourth in the AL with 36 RBIs.