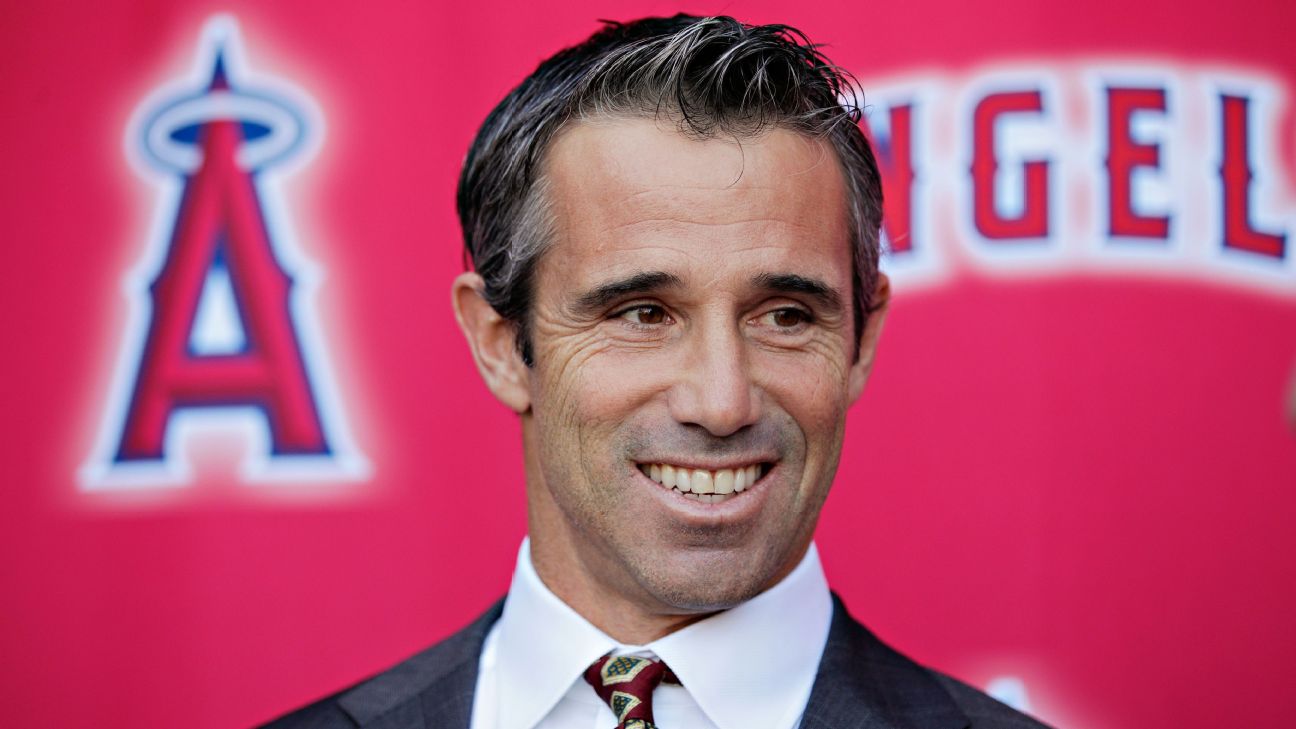 ANAHEIM, Calif. -- During 18 major league seasons as a catcher and four more as a manager, Brad Ausmus developed a strong gut instinct about nearly everything that happens on a baseball field.

While spending the past year out of a dugout, he developed a deeper understanding of how traditional beliefs aren't always correct.

With a sturdy baseball foundation and a willingness to adopt new analytical knowledge, Ausmus was the Los Angeles Angels' ideal choice to take charge as their first new manager of the 21st century.

"I'm very excited to have an opportunity to lead a club like this with so many great players,'' Ausmus said after trying on his No. 12 Halos jersey.

Ausmus was dropped by the Detroit Tigers last fall after four intermittently successful seasons with him as manager ended with a wholesale franchise rebuild. He spent the past year working in the Angels' front office, examining every aspect of the organization as an assistant to Eppler.

Ausmus thinks his lack of managerial experience was an asset when Detroit hired him, as he fit into the popular mold of hiring managers shortly removed from their playing days. But he feels better prepared for his second dugout job -- partly because he has a newfound appreciation for the role of analytics in the modern game.

"Adaptability is important to the Angels, and part of the reason I came to the Angels was because I needed to adapt,'' Ausmus said. "Analytics are part of the game. I had an understanding of analytics before I got here. I've been using numbers to create scouting reports since about the year 2000. ... If you use the numbers to make the players and the teams better, that's the important thing. I wanted to find out more about how we can help players on the field be better, how we can make teams win.''

The Angels also are changing, with Eppler pushing the organization into modern methods of scouting and analysis to help Mike Trout, Albert Pujols, Shohei Ohtani and their teammates.

Eppler praised Ausmus by repeatedly highlighting the importance of communication, adaptability and a willingness to grow. With a lengthy big league career and a Dartmouth degree, nobody questions Ausmus' baseball credentials or intellectual abilities.

Ausmus realizes he drew many fans' ire in Detroit with decisions -- often about pitching -- seen as old-school violations of modern baseball thinking.

"The one thing I really enjoyed about being involved with the Angels this past year is I can take the numbers, and I can use my playing experience and wrap my brain around it and say, 'OK, how does this apply on the dirt and on the grass?''' Ausmus said. "That's what managers have to do nowadays. They have to take those numbers, understand them -- they don't have to write the algorithms, but they need to understand them -- and then apply it to the baseball player, to the baseball field. That's the fun part for me. It's easy to derive a number, but it's a lot more difficult to apply the number.''

Eppler and Ausmus barely knew each other until last year, even though Eppler grew up in San Diego and Ausmus has lived there for 25 years. Eppler jumped at the chance to hire Ausmus a few weeks after he left the Tigers.

"Throughout the year, I just learned what kind of person he was and how he connected with people, a little bit about his demeanor, and then I also got to gauge his intellectual curiosity,"Eppler said.

Other teams chased Ausmus this month, including the Cincinnati Reds, who hired David Bell as their manager Sunday.

Ausmus wanted to stay with the Angels, but Eppler put 10 final candidates through a nine-hour interview process. They all completed a two-hour written exam that included specific questions, such as "What is the probability of three consecutive strikeouts?''

But Eppler wasn't interested in the answers -- three straight strikeouts happen about 1 percent of the time, according to the GM --so much as the intellectual process used by the candidates to come up with answers. Ausmus didn't recall his exact answer to that question, but he remembered doing some "basic math'' and figuring it was below 3 percent.

Apparently, his process was close enough.