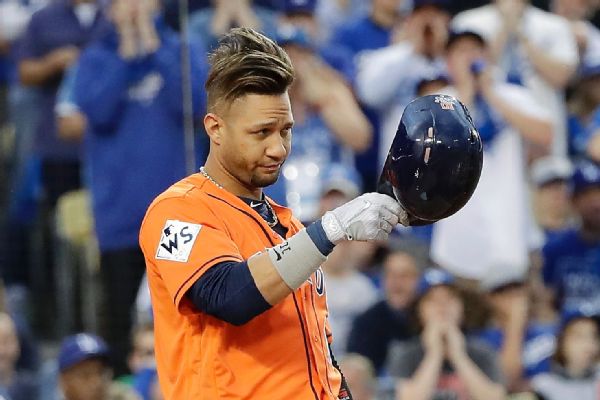 LOS ANGELES -- In an apparent effort to make further amends for his racist gesture earlier in the World Series, Houston Astros first baseman Yuli Gurriel took off his batting helmet and slightly nodded his head when he faced Los Angeles Dodgers starter Yu Darvish in the first inning of Game 7 of the World Series on Wednesday night.

With boos loudly raining down from the Dodger Stadium crowd, Darvish prepared himself behind the mound. Gurriel dug into the box and then waited until he got the right-hander's attention before making the respectful gesture. Darvish seemed to extend his glove slightly in acknowledgement.

The sellout crowd did not seem to notice and booed Gurriel. They continued to boo him during the at-bat, while intermittently chanting, "Let's go Dodgers." The 13-pitch at-bat ended the inning when Darvish induced Gurriel to fly out to right.

During Game 3 of the World Series in Houston, Gurriel took Darvish deep in the bottom of the second inning at Minute Maid Park. After the homer, cameras caught Gurriel using his fingers to slant his eyes in a gesture that is considered offensive to people of Asian descent; Darvish is of Japanese and Iranian descent. Gurriel has been suspended five regular-season games, beginning next season. It will cost him around $320,000.

Darvish, for his part, has maintained his stance of forgiveness toward Gurriel.

During Game 6 when Gurriel came to bat here for the first time since the incident, Dodgers starter Rich Hill said he took extra time to go to the mound to let the boos grow louder.

Astros manager A.J. Hinch said the Game 6 boos were "as loud and as long" as he has ever heard in sports.

"I don't think the Dodger fans will let him get past it until, maybe never," Hinch said before Game 7. "I think people have long memories in situations like this.