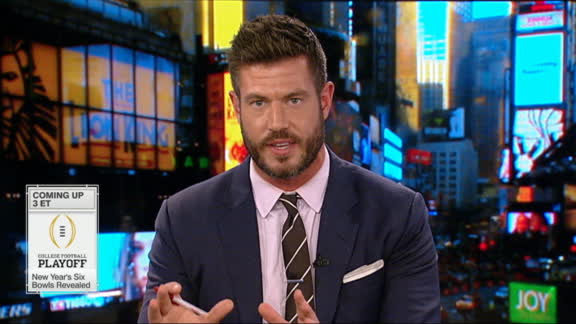 South Carolina made it official Sunday, announcing that Will Muschamp has agreed to become the Gamecocks' next head football coach.

Muschamp was one of several candidates to interview for the job this week in a search that took an odd turn Saturday. Arizonaathletic director Greg Byrne tweeted that his coach, Rich Rodriguez, had not committed to a South Carolina offer and would remain the Wildcats' coach.

But sources close to the situation told ESPN.com's Chris Low that Muschamp had always been at or near the top of the Gamecocks' list. Muschamp interviewed with South Carolina officials earlier this week along with several others, including Oklahomaoffensive coordinator Lincoln Riley and South Floridacoach Willie Taggart.

An introductory news conference for Muschamp is planned for Monday, a source said.University of South Carolina trustees scheduled a 9 a.m. meeting Monday with a lone agenda item, Athletics Employment Contract. School trustees are required to approve all contracts over $250,000.

The 44-year-old Muschamp is in his first season as Auburn's defensive coordinator. He was Florida'shead coach for four seasons from 2011 to 2014, compiling a 28-21 record before being fired at the end of the 2014 season.

Muschamp has an extensive background in the SEC, both as a coach and a recruiter, which made him attractive to South Carolina athletic director Ray Tanner. A 20-year coaching veteran, Muschamp has coached 16 of those years in the SEC. He played at Georgiaand coached under Nick Saban at LSU, where he was the Tigers' defensive coordinator on their 2003 national championship team. He's had two stints as the defensive coordinator at Auburn.

In seven seasons as an SEC defensive coordinator, his defenses have been ranked in the top 15 nationally in scoring defense six times. The only exception was this season. Auburn is ranked 68th nationally in scoring defense, giving up 27.3 points per game, but the Tigers improved as the season progressed. Muschamp's defense gave up just seven touchdowns in the last four SEC games.

"I really appreciate Coach Muschamp's hard work and dedication for our program at Auburn this past year and wish him nothing but the best with his new job," Tigers coach Gus Malzahn said in a statement. "I will begin a search immediately for our next defensive coordinator."

Renowned for his fiery nature, Muschamp won 11 games and guided Florida to the Sugar Bowl in his second season as head coach in 2012. But it was a struggle for the Gators offensively the whole way under Muschamp, and they dipped to 4-8 in 2013 and 6-5 in 2014. Muschamp had three different offensive coordinators in four years at Florida, and the lack of consistency and production on offense was ultimately his undoing.

The first part of his tenure at Florida was spent cleaning up a program that his predecessor, Urban Meyer, deemed as "broken" before resigning following the 2010 season. But it was all downhill following the 11-win season in 2012, and Muschamp acknowledged on his way out that he simply didn't win enough games. "That is the bottom line," he said.

This wasn't the first time Muschamp was on South Carolina's radar. Legendary coach Steve Spurrier was close to quitting after the 2014 season, and sources told Low that Muschamp would have been the Gamecocks' choice to replace Spurrier had the Head Ball Coach retired then. Muschamp's name also came up as a possible defensive coordinator under Spurrier, but Muschamp instead went to Auburn, where he was one of the highest-paid defensive coordinators in college football this season at $1.6 million.

ESPN.com's Joe Schad and Chris Low and The Associated Press contributed to this report.