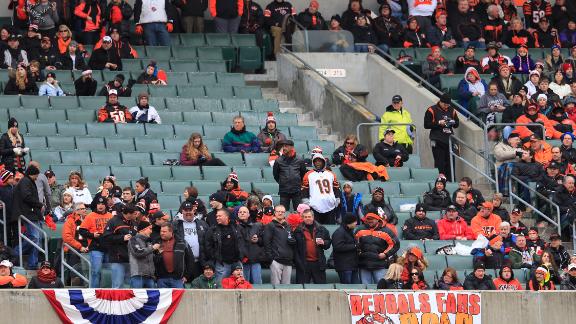 CINCINNATI -- Two Cincinnati Bengals players have a message for those who have jumped off the team's bandwagon -- stay off.

Safety George Iloka and veteran Pro Bowl offensive tackle Andrew Whitworth weren't very happy when asked to discuss fans who had given up on the team after Sunday night's 43-17 loss to the New England Patriots.

Comments on social media during yet another Bengals loss in prime time suggested many fans were skeptical, even after Cincinnati's 3-0 start to the season.

"Let them jump off," Iloka said Monday. "I'm not worried about the people who jump off. We don't want them as fans anyway."

Much like the Bengals, the Patriots had their own experience with a blowout loss just last week. In the days that immediately followed last Monday's 41-14 loss at Kansas City, the Patriots heard from fans who were starting to give up on them and their future Hall of Fame quarterback,Tom Brady.

Less than 15 minutes into Sunday's game, the Patriots were rolling, and Brady was in the good graces of his fan base once again.

"We look to the Patriots, how they came out and lost on Monday night in prime time and saw all their fair-weather fans jump off the bandwagon," Iloka said. "They're probably back on after they beat us. So we look to them and see how they came out, and we hope to do the same things on Sunday and beat the Panthers."

Initially, Whitworth didn't want to address a question about his response to Bengals fans abandoning the team.

"They didn't come to the games when we were 3-0, so I don't know what to say to them," he began, citing the Bengals not selling out their Weeks 2 and 3 games.

"That stuff's just garbage," Whitworth continued. "I'm not worried about the fans or the media or any of that crap. We need to go play well and win. The same people thought Tom Brady should quit football and retire from the NFL a week ago, so I bet they don't think that now. There's a lot of people [who] are reaping what they sowed in their comments last week about the New England Patriots, and now the team that was what everyone considered the hottest team [the Bengals], they beat the snot out of. So what does everybody have to say now?

"That's football. Every week you have to show up and play your best, and if you don't, you're going to get beat. That's NFL football, and that's why even with the best team in the league and the worst team in the league, there's not much difference as people would like to think."

Players reacting to fans wasn't limited to Cincinnati, either, as Chicago Bears defensive end Lamarr Houston tweeted that fair-weather fans should "eat dirt" after the Bears lost at Carolina on Sunday.