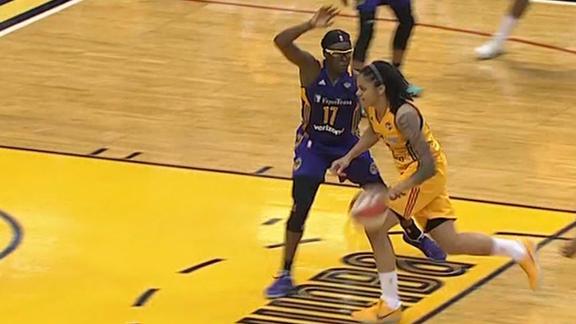 INDIANAPOLIS -- To say the least, Pokey Chatman did not need any convincing whatsoever to take over as the Indiana Fever's coach. Let go by Chicago after last year's WNBA season, Chatman couldn't have been happier to find such a perfect landing not far away.

It's 200 miles from Allstate Arena in Rosemont, Illinois -- the suburban Chicago home of the Sky -- to Banker's Life Fieldhouse in downtown Indy. If you make the drive, the relief of escaping Chicago traffic leads to a pretty standard Midwestern sojourn south through nondescript farmland on Interstate 65.

For Chatman, this move has been easy. Although it's early in the season, the Fever earned a victory Wednesday that means just a little something extra near the start of Chatman's Indiana tenure. They beat the defending WNBA champion Sparks, handing Los Angeles its first loss of the season 93-90.

Incidentally, earlier in the day, back in Rosemont, the former "face" of the franchise, Elena Delle Donne, visited the Sky for the first time since she was traded to Washington earlier this year, a move she requested. It's safe to say that by the end of last season, her relationship with Chatman had gone south. But the Sky's firing Chatman didn't keep Delle Donne in Chicago.

Delle Donne scored 21 points in the Mystics' 82-67 victory over the Sky and acknowledged that it felt weird to be back in Chicago on the visitor's side. But she's quite happy with the Mystics, and Chatman is glad to be with the Fever.

It all worked out, right? It seems so. But whether it turns out OK for the Sky remains to be seen.

Chatman, though, has moved on, and the timing is right for her. Indiana is in the midst of the biggest of transitions, as franchise icon Tamika Catchings, who retired after last season, now works in the Fever/Pacers front office. She was doing television commentary for Wednesday's game. Her influence remains, but there's a clear delineation of a new era in Indy.

"The core that's still here, they have an identity with the success they've had," Chatman said of players such as Briann January, Marissa Coleman, Erlana Larkins and Shenise Johnson. "Then you bring in someone like a Candice Dupree, who can fit in and be efficient anywhere she plays. What I've tried to add is pushing the pace, but not at the expense of turning the ball over so much."

Turnovers hurt the Fever a lot last season, so that's a valid concern. But increasing the offensive pace was something that former coach Stephanie White, who left to take over at Vanderbilt, started when the longtime Fever assistant was elevated to head coach in 2015. Chatman sees what she's doing now as a continuation of what White started.

"That seed was planted with Steph," Chatman said. "They wanted to play at a faster pace because that's where the game has gone to. And we know we're good in the half court."

That was true Wednesday, as the Fever shot 53.7 percent overall and 68.8 from 3-point range (11-of-16). Point guard Odyssey Sims was sidelined with an ankle injury, and it was only the Sparks' second game with Candace Parker, Essence Carson and Jantel Lavender back from playing in Turkey.

Regardless, a win over the Sparks is a big deal. The Sparks looked very precise and powerful for much of the first half and led 55-41 at the break. Things changed dramatically in the third quarter, as the Fever outscored the Sparks 27-10.

A Coleman 3-pointer -- her fifth of the game -- with 38.1 seconds left in the fourth quarter was the last big dagger of the night for the Fever.

Coleman finished with 19 points, while Dupree -- who was traded to Indiana after spending the last seven years in Phoenix -- had 18 points and eight rebounds.

Dupree never planned to play for Indiana, honestly, and would have liked to stay in Phoenix. She's married to Mercury player DeWanna Bonner, who is sitting out this season because of pregnancy.

"DB is there, and I had hopes of retiring there," Dupree said. "But I am open to a new challenge. It's actually been a good adjustment for me. I'm enjoying it. Being in a new environment is something that can help keep you focused.

"There's a lot of teaching here for some of the younger players. And I have played for Pokey before overseas, so that was a big plus for me."

Like Dupree, Chatman wasn't looking to leave where she was last season. Even without Delle Donne, who missed the playoffs with injury, Chicago reached the WNBA semifinals. Chatman thought the Sky had a chance to build on that this season. Instead, she was fired after six seasons that included a trip to the WNBA Finals in 2014.

But less than a month after she got the bad news from Chicago in October, the Fever made their offer to Chatman.

"It feels good here," she said. "My sister says to me, 'You have a smile on your face a lot now.' They give you every opportunity to be successful here. There's a culture that's in place here. There are expectations, no doubt. We've got to win games, for sure. But I can feel the sense of family and the sense of fun."