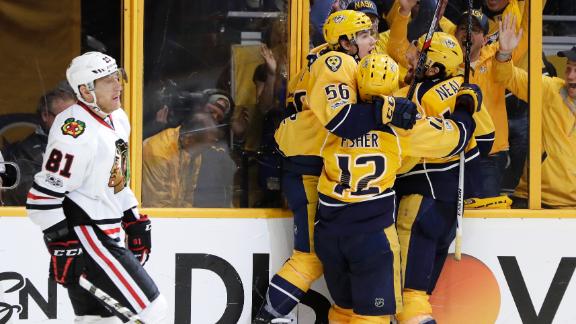 Of the four games with blown two-goal leads Monday night, which was the most damaging?

Craig Custance: Both the Calgary Flames and Chicago Blackhawks are now in trouble, down 3-0 after Monday night's losses, and both teams had high playoff hopes. The Flames are early enough in their development curve where every one of these losses is a lesson. At least that's a silver lining. For the Blackhawks, it's just pure disappointment. A shot at another Stanley Cup is nearly gone.

Pierre LeBrun: It certainly feels like the end for both Chicago and Calgary. The Flames even chased John Gibson from the net, but then saw the Ducks rally back for the 5-4 win. Given Calgary's dismal record in Anaheim, I don't see how they could win the next four games. If there's a team that you can believe has that kind of miracle run in them, it's the Blackhawks, given their pedigree -- but not only did the Predators come back from two goals down Monday night, they completely owned overtime. I picked the Preds back in September to make it to the Stanley Cup finals. They finally look like that team after an inconsistent regular season.

Scott Burnside: Have to say that when the Blackhawks went up 2-0 in the second period on Patrick Kane's power-play goal, I was thinking history was about to repeat itself for Nashville, which had the Blackhawks on the ropes the previous two times they've met in the playoffs but couldn't match Chicago's depth and will to win. But talk about redefining your character by coming back with two third-period goals and the OT winner to go up 3-0 in the series. So if I was wrong about Nashville, does that mean I was wrong about Chicago, the top team in the Western Conference? Apparently. Chicago is cooked.

Rob Vollman: Psychologically, Calgary's loss has to be the most devastating, unquestionably. But statistically, Chicago's was probably the loss that stings most, because the Blackhawks' chances of winning the series dropped by the greatest extent Monday night. With a win, they were still very much in this series, but now their odds are near zero. The Ottawa Senators blew a 3-0 lead before redeeming themselves in overtime, the Washington Capitals are still very much in their series with the Toronto Maple Leafs even with their Game 3 loss, and Calgary's chances of winning its series were quite modest to begin with.

Predators comeback pushes Blackhawks to the brink
Trailing 2-0, the Predators storm back to send the game to overtime where Kevin Fiala scores the winner to put the Blackhawks in an 0-3 series hole.