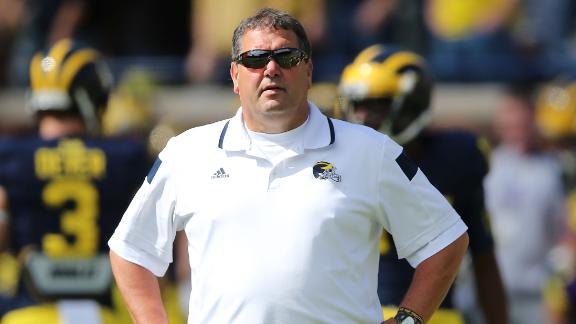 Michigan coach Brady Hoke said he isn't feeling the heat as questions arise about the future of the program or his role in shaping it after another disappointing loss this weekend, adding that the outside discussion about where the Wolverines are headed won't change the way he makes decisions moving forward.

"It won't affect the course that we want to go, I can tell you that," Hoke said at a news conference Monday afternoon.

Michigan's 26-10 loss to visiting Utah on Saturday dropped the team's record to 2-2 this season and 3-7 since November. The Wolverines have struggled offensively during that stretch. They have only one touchdown in their last three games against Power 5 opponents, a garbage-time score in the final minutes of a bowl loss to Kansas State.

Hoke said the coaching staff will decide Tuesday if it will replace senior Devin Gardner at starting quarterback. The staff is also considering other personnel changes to try to spark production.

Players and assistant coaches vehemently defended Hoke and the state of the locker room Monday. Defensive coordinator Greg Mattison, who first shared a sideline with Hoke in 1984, said he would not have returned to Michigan to coach if not for Hoke taking over the team in 2011.

"Anybody can say anything they want. That man is why I'm here," Mattison said. "He's a tough, hard-nosed son of a gun. When a guy works as hard as he does and prepares the way he does, then there's not pressure. To me, pressure is when you haven't done your job or aren't doing your job. Pressure is when you don't prepare."

Mattison and Hoke butted heads in front of ABC's cameras Saturday after Mattison was flagged for a sideline infraction late in the second quarter. Both coaches downplayed the incident as a normal interaction between competitive friends. Mattison said Monday that he shouldn't have "snapped" at Hoke during the game.

The frustration level with a poor start hasn't caused fractures among the players in the locker room, said redshirt junior Blake Countess, but he's keeping a close watch to make sure those problems don't start to develop.

"You've got to make sure everybody is still believing and still into it, which we are," Countess said. "The moment guys start to waver, that's when you start to go downhill. We haven't wavered at all. Being an older guy, I have to keep more of an eye on it."

Hoke said he can't keep his players from hearing the Internet chatter and disapproval from Michigan's fan base, but he doesn't think it has affected the team's psyche.

"It's out there," he said. "It's what you choose and what you believe. We've got great belief in our locker room."

Hoke told the players that their goal of a Big Ten championship is still attainable. The Wolverines open their conference schedule Saturday at home against Minnesota. The coach said "this will be a good football team" by the time it takes the field against the Gophers.

Hoke's Future At Michigan In Jeopardy?
Danny Kanell discusses Michigan's two losses versus Power 5 opponents this season and explains why fans need to be patient with coach Brady Hoke and the Wolverines.