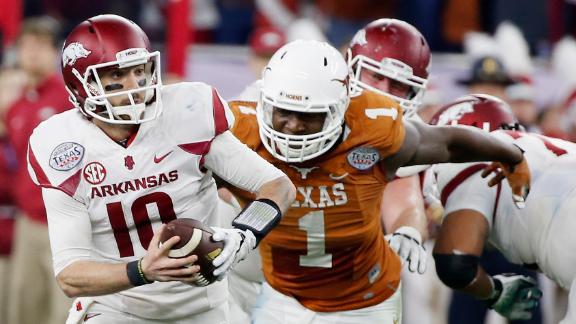 Arkansas has rewarded football coach Bret Bielema with a two-year extension and raise that will make him a member of the $4 million club.

Bielema's new six-year deal will run through the 2020 season, and his average annual total compensation will be $4.25 million. He will earn $4 million in 2015 with $100,000 increases in each subsequent year. Additionally, Bielema will now be eligible for athletic and academic achievement incentives totaling up to $1 million per year.

Bielema becomes the eighth head coach in the SEC with an average annual salary of at least $4 million.

The Hogs played their best football down the stretch this season, Bielema's second in Fayetteville, and finished 7-6, including a 31-7 win over Texas in the Advocare V100 Texas Bowl. They won four of their last six games, and four of their last five losses were by a touchdown or less.

"Coach Bret Bielema is not only one of the best college football coaches in the nation, he is an outstanding leader," Arkansas vice chancellor and athletics director Jeff Long said. "What Coach Bielema and his coaching staff have done for our young men, on and off the field, is something that has dramatically changed the course of our program and most importantly positively impacted the lives of our football student-athletes. He is building a championship program in a way that all Arkansans can be proud of. We look forward to his continued leadership of our football program and the many successes yet to come."

The Hogs had the SEC's most improved defense last season, holding opponents to an average of 19.2 points per game after allowing 32.3 points per game in 2013. The 11.9 point improvement ranked seventh nationally. Arkansas became the first unranked team in college football history to shut out back-to-back ranked opponents after blanking No. 20 LSU and No. 8 Ole Miss.

"Every day since we arrived in Fayetteville, we have worked with our coaches and student-athletes on building something special here at the University of Arkansas," Bielema said. "We have assembled another great staff and recruiting class to help us continue to move forward in the SEC West. My wife and I love Arkansas and the tremendous support the Razorbacks receive throughout the entire state. We are also appreciative of the unwavering support of Chancellor (Dave) Gearhart, Jeff Long and the entire Razorback nation as we all work together to give Arkansas something it has never had in the most competitive conference in the nation."