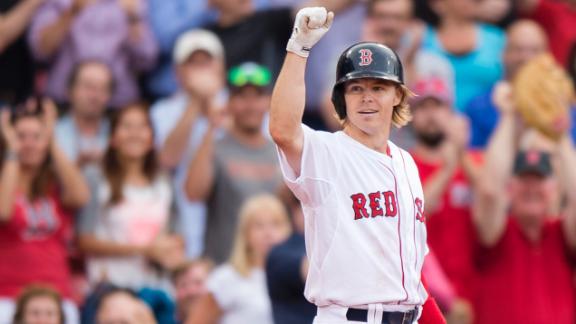 Playing second base in the absence of injured second basemanDustin Pedroia, Holt wrote a little more history Tuesday afternoon at Fenway Park. He became the first Red Sox player in almost 19 years to hit for the cycle, doubling in the first, singling in the fifth, homering in the seventh and tripling in his final at-bat, in the eighth, in Boston's 9-4 win over the Atlanta Braves.

"As soon as barrel hit ball, I was like 'Oh, my God, oh, my God, oh, my God,' because once it gets in the [center-field] triangle, anything is possible," said Holt, who connected off Braves reliever Sugar Ray Marimon and sent a line drive over the head of Braves center fielderCameron Maybin, the ball rolling to the base of thewall near the 420-foot sign.

"I was just running on my horse as hard as I could," said the native of Fort Worth, Texas, who turned 27 five days ago, on June 11.

Holt became the first Sox player to hit for the cycle since John Valentin, now the assistant hitting coach for the Los Angeles Dodgers, who accomplished the feat on June 6, 1996, at Fenway Park against the Chicago White Sox.

The last player to do so in the major leagues was Michael Cuddyer, who did it for the Colorado Rockies on Aug. 17, 2014. Cuddyer is now with the Mets.

The only player on the current Sox roster to hit for the cycle before Holt was Pablo Sandoval on Sept. 15, 2011, while he was playing for the Giants. Holt became the 20th Sox player to hit for the cycle, which matches the number of Sox pitchers who have accomplished another baseball rarity: a no-hitter.

"Do it twice," Sandoval cracked to Holt as he walked past the crowd of reporters around Holt.

Holt went into the game with just one home run and a triple in his first 147 at-bats this season. His home run in the seventh, off Braves starter Julio Teheran, was the first he has hit in 93 career games played at Fenway Park. "And probably the last, too," he said.

Holt said he lost sight of the ball after leaving the batter's box and did not realize it had gone home run distance.

"I hit it good," Holt said, "but I know [Braves left fielder] Jonny Gomes knows how to play the Monster, so I just put my head down and was running as hard as I could to second base. I heard cheers. I was kind of looking around: 'Where's the ball, where's the ball?'

"I was still sprinting when I crossed the plate, and Mookie [Betts] was laughing pretty good at me."

Betts, the next batter after Holt completed the cycle, had a chance to duplicate Holt's feat, having doubled, tripled and singled in four at-bats. But he flied out to deep center.