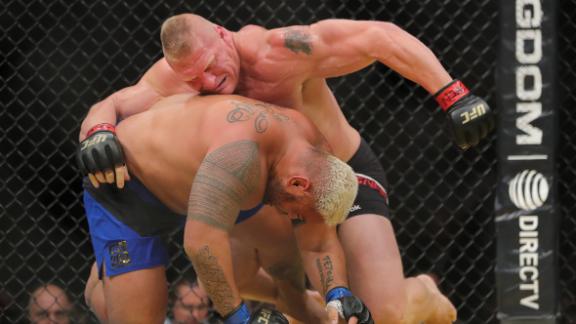 LAS VEGAS -- Heavyweight cage fighting, apparently, is just like riding a bike if you're Brock Lesnar.

Lesnar, 38, stuck to his strengths against Hunt, who was ranked No. 7 in the world by ESPN.com ahead of the weekend and fought for the interim UFC title in late 2014. The WWE star alternated between keeping a safe, long distance from Hunt and shooting takedowns.

When he was able to get Hunt down, which he did in the first and third rounds, it was smooth sailing. His massive size and wrestling ability looked as dominant as they ever were during his peak in mixed martial arts, when he won and defended the heavyweight title between 2008 and 2010.

"Oh man, it took me a little while to get acclimated," Lesnar said. "Words can't describe it. Thank you everybody. Thanks so much."

The UFC announced Lesnar's return to the Octagon in June, a little more than one month prior to UFC 200. He remains under contract with the WWE and is scheduled to appear at SummerSlam in August. Lesnar, who resides in Saskatchewan, Canada, declined to say whether he will fight again.

All things considered, it was a relatively smooth return to the Octagon for Lesnar. Hunt did manage to land a few punches, but Lesnar was able to keep the pressure, and Hunt, on the mat.