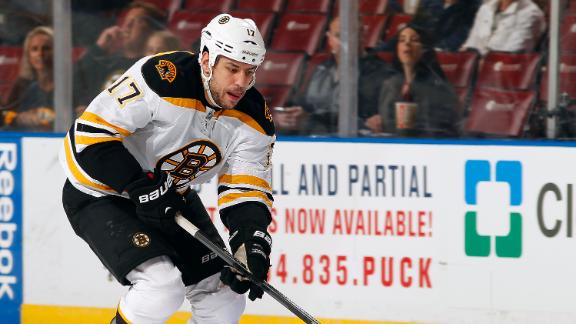 SUNRISE, Fla. -- The Boston Bruins traded forward Milan Lucic to the Los Angeles Kings on Friday in exchange for the No. 13 overall selection in the 2015 NHL draft, goaltender Martin Jones and prospect Colin Miller, the teams announced Friday.

With the trade of Lucic, and the Bruins' earlier deal on Friday that sent defenseman Dougie Hamilton to the Calgary Flames, the Bruins held the Nos. 13, 14 and 15 picks in the draft. They used the No. 14 pick on left wing Jake DeBrusk of the Swift Current Broncos of the Western Hockey League, and the No. 15 pick on right wing Zachary Senyshyn of the Sault Ste Marie Greyhounds of the Canadian Hockey League.

Lucic, 27, has one year worth $6.5 millionremaining on his contract and will be an unrestricted free agent after the 2015-16 season. He was looking for a contract extension with Boston.

The Bruins will retain $2.7 million of Lucic's contract.

"I can't tell you how difficult the call was to make, and I expressed that to Milan," Bruins general manager Don Sweeney said. "It was a very difficult conversation to have. I just felt the situation we were in, it was going to be very difficult to extend the offer to the level that it would take to retain Milan going forward."

Added Lucic: "I'm anxious, sad and excited all at the same time."

The Bruins originally drafted Lucic in the second round (No. 50 overall) of the 2006 NHL entry draft. He played eight seasons for the Bruins and accumulated 139 goals and 203 assists for 342 points in 566 regular-season games.

Lucic became a top-line left winger for the Bruins, but his production dropped considerably last season, as he scored only 18 goals with 26 assists for 44 points in 81 games. Bruins president Cam Neely called it a disappointing season for Lucic during the team's season-ending news conference.

Lucic reacted to news of the trade in a social media post Friday night.

Miller had 19 goals and 33 assists in 70 games for Manchester in the American Hockey League last season. Jones played 15 games for the Kings last season, posting a 4-5-2 record and 2.25 goals-against average.