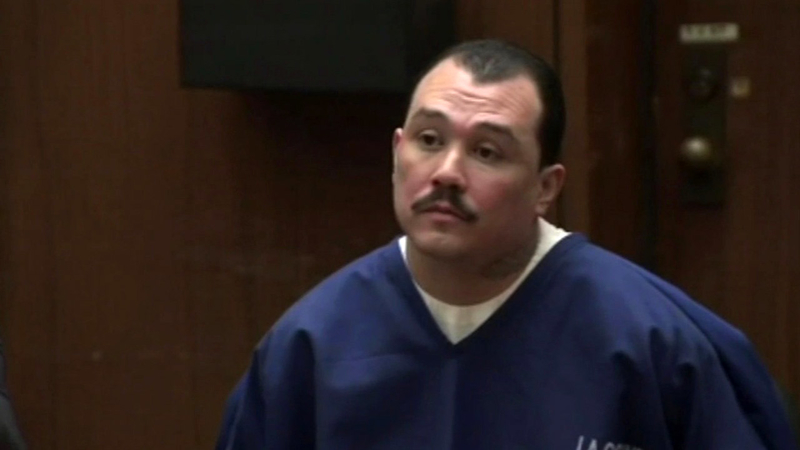 LOS ANGELES (KABC) -- Louie Sanchez, one of the men who attacked a San Francisco Giants fan outside Dodger Stadium, was sentenced to six years in prison for a weapons charge unrelated to the beating.

Police found several weapons belonging to Sanchez when they were investigating the 2011 beating of Bryan Stow.

Sanchez, 32, is already serving an eight-year prison sentence for attacking Stow. During that sentencing hearing, Sanchez was admonished by the judge for smirking and showing no sign of remorse.

Ahead of his sentencing on Thursday, Sanchez had written an apology letter to Stow.

He up to 10 years in prison for being a felon in possession of guns. But Sanchez hoped to avoid a lengthy prison sentence, and he asked Judge Fernando Olguin for mercy in a hand-written letter.

"I realize my actions has received a lot of publicity and I pray that the court looks beyond that, the situation that occurred in the parking lot at Dodger Stadium with four intoxicated men who had an altercation with my sister & my 9 year old son. When I saw the fear on both of their faces and asked them what happened I fell into the heat of passion and lost my composure and went after them," Sanchez wrote in the letter.

"Unfortunately Mr. Stow got hurt and I send my deepest sympathy to Mr. Stow & his family. This unexpected event was an accident. I want to apologize to everyone that my actions have effected in anyway at all, I pray the court to show mercy," Sanchez wrote in the letter.

Assistant U.S. Attorney Max Shiner wanted Sanchez to serve nearly eight years in federal prison after he wraps up the state prison sentence for mayhem in the beating of Stow. In addition to a lengthy criminal record that includes spousal abuse, firearms offenses and drunken driving, Shiner cited the Stow case for its "depravity and brutality."

Stow, a former Santa Cruz paramedic and father of two is making progress. Last month, he threw out the first pitch at the San Jose Giants minor league opening game.

It was an emotional moment as he was able to get out of his wheelchair and walk onto the field. Stow has severe brain damage and will need life-long care.