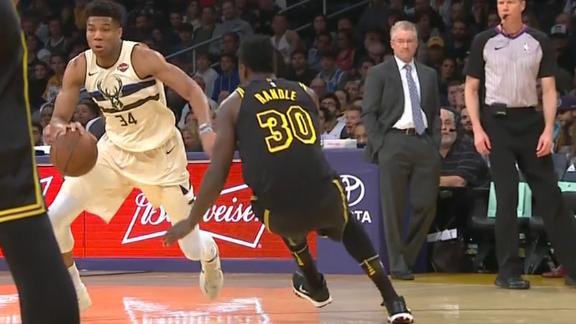 LOS ANGELES -- Giannis Antetokounmpo is one of the best basketball players in the world. Yet he did not touch the ball in the final 35 seconds of regulation and several possessions in overtime during the Milwaukee Bucks' 124-122 victory over the Los Angeles Lakers on Friday night at Staples Center.

On a night when the Bucks should be celebrating the fact that they are on the verge of clinching a playoff berth after consecutive wins on back-to-back nights over the Golden State Warriors and the Lakers, Friday night's victory, and the way in which it transpired, offered another reminder of just how much work the organization has to do in the offseason -- in finding the right coaching staff to help Antetokounmpo grow and creating the proper roster composition to allow that growth to be achieved.

Antetokounmpo is too dominant of a player, even on an off night when he was 8-for-20 from the field and struggled to find a rhythm early, to ever go through stretches late in games where he isn't touching the ball. He didn't even have a point, assist or turnover in the final 2:18 in regulation. When asked if his teammates had to do a better job finding him late in games, Antetokounmpo demurred, but his answer should scare the Bucks front office about the short-term future.

"A better job?" Antetokounmpo said. "I wouldn't say that. I asked for the ball. [Eric] Bledsoewanted to take a shot and thenKhris [Middleton]wanted to take the shot, so I always trust my teammates and if they feel like they can execute in those moments in the game I'm just going to trust them and hopefully they end up well. We got the win, that's all that matters. And I trust my teammates they're going to find me when it matters the most."

Yes, Bledsoe scored 39 points, including outscoring the Lakers by himself 11-10 in overtime and knocking down seven of his 12 three-point attempts. But there were far too many possessions late where Bledsoe didn't look to pass and there was little to no ball movement. More important, it's not Bledsoe's team -- it's Antetokounmpo's. Antetokounmpo is the 23 year-old superstar and face of the franchise. He's paid to deliver -- and has multiple times this season -- in exactly those kinds of moments. If he wants the ball, he should get it.

With the game on the line, Bledsoe kept the ball and jacked up a contested 3-pointer that missed. Middletoncollected the rebound and proceeded to miss a contested three-pointer of his own. Bucks interim head coach Joe Prunty acknowledged that he could have called a timeout but decided against it, noting that he didn't think Middleton's shot was bad, though he wished he would have driven the ball to the rim. Prunty got defensive when asked if Antetokounmpo needed to be more assertive in asking for the ball late in games.

"I'm very pleased with the way Giannis is playing," Prunty said. "I think the other thing you're not putting into account here is how much work he was doing defensively on the other end. He had multiple matchups that were difficult. In overtime he's on[Brook] Lopezfor a stretch, he's had[Julius] Randlefor a stretch. He was doing a ton of work down there so I don't think that's fair to say, 'Hey, he has to do all of this.' He is doing all of this stuff. We know what Giannis does and we know he's capable of making shots down the stretch, but I don't think we can discount what Khris has done for us not only in this game, but in other games, and same with Bled."

While Prunty bears responsibility for making sure Antetokounmpo gets the ball in these kinds of situations in the short term, the Bucks' issues are deeper than what any interim coach might or might not be able to fix in a couple of months. Prunty is merely a placeholder until Bucks ownership and general manager Jon Horst decide who will lead their team going into next season, but the issues that led to Jason Kidd's firing earlier in the season were again on display in Friday's win. The Bucks had a 20-point lead with 2:08 left in the third quarter to a Lakers team playing without Lonzo Ball and Kentavious Caldwell-Pope, arguably the team's best defender, who was ejected late in the second quarter. Middleton, who had 28 points after three quarters, didn't score in the fourth quarter or overtime, only taking four more shots the rest of the game.

For his part, Bledsoe doesn't seem to subscribe to the notion that players should defer to a superstar late in games just because of their role on a team.

"We got a lot of talented players on the team," Bledsoe said. "Some nights Khris got it going, some nights Giannis got it going. Some nights I got it going. We try to play off that and just try to grind it out. [The Lakers] did a tough job of coming back, sending it to overtime and I thought we did a great job of keeping our composure."

Bledsoe admitted that the Bucks could do a better job of finding Antetokounmpo at times late in games but was confident in the belief that the team had enough other players to pick up the slack some nights. As Frank Maddenof SB Nation's Bucks blog Brew Hoop pointed out, the Bucks earned their first win of the season when Antetokounmpo was a negative plus/minus player, which makes them 1-26 now on the year. They were minus-16 in Antetokounmpo's 42:31 and plus-18 in the 11 minutes when he was on the bench.

That shouldn't excuse the fact that Antetokounmpo didn't touch the ball on some of the most important possessions of the game.

"I don't talk about it," Antetokounmpo said, when asked if he would talk to his teammates about getting him the ball more late. "I trust my team, they're going to find me. They've been looking for me all year so I trust them."

Antetokounmpo played the role of supportive teammate after a late-season win his team needed. But it's a role he should never have to play given how talented he is and how important his evolution is to the future of the Bucks franchise. 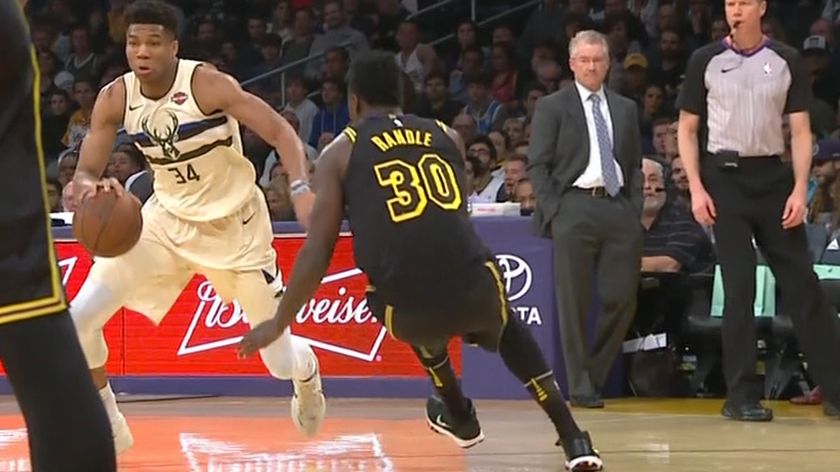 Giannis breaks Randle's ankles on way to the hoop
Giannis Antetokounmpo puts Julius Randle on the ground with a tricky move then explodes to the basket, making a layup and gets fouled. 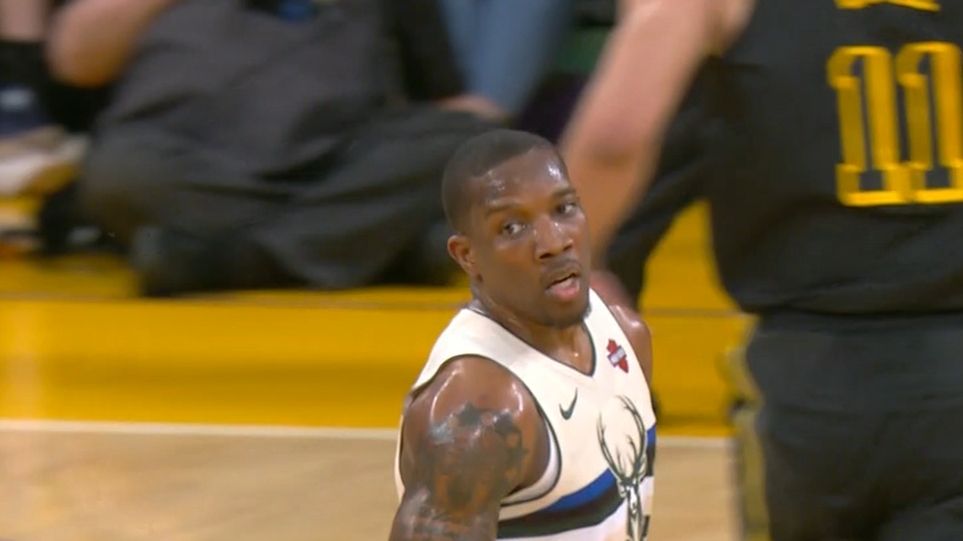