Can Blake Griffin change the course of a franchise? 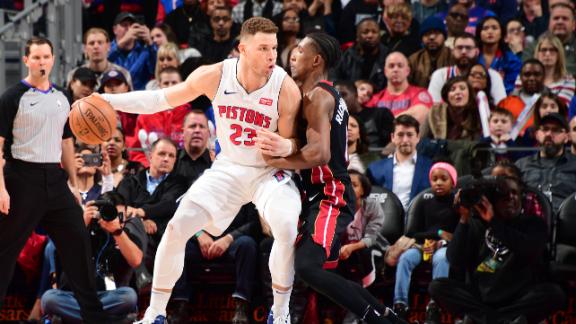 For a guy who built his brand appeal by dunking over sedans, Blake Griffin runs the fast break like he's working a crossword puzzle. He moves briskly, alert, head up, watching the pieces move into place.

In just his third game with the Detroit Pistons, the 6-foot-10 power forward saw Andre Drummond at "one o'clock," a half-pace ahead of Portland's Jusuf Nurkic on the right side of the floor. As Griffin rumbled past half court up the left side, he lobbed the ball through the air. Drummond snatched it just above the lip of the restricted area and threw it through the iron in a single motion.

"The pass he made to Andre on the break excited him," Pistons coach Stan Van Gundy said. "I'm watching and I think he enjoys that a lot more, it seems, than he does when he scores."

If this is what the treadmill of mediocrity looks like, the Pistons will happily run forever. At 27-26, they own the Eastern Conference's longest winning streak at five games and are clawing their way back into playoff contention. Griffin has been the spark. On Friday night (ESPN, 7 ET), Griffin and his new squad will face the only team he'd previously played for during his nine seasons in the NBA -- a franchise he single-handedly re-energized when he entered the league.

Drummond has seemingly smiled more in the past week than he has in his previous five seasons in Detroit, and why not? Winning in the NBA is exhilarating. So is collecting drop-off passes, alley-oops and baseline skids from your running mate in the frontcourt. According to Second Spectrum, since the Drummond-Griffin duo suited up for the first time Feb. 1 versus Memphis, only six players have received more assisted passes from a single teammate than Drummond has from Griffin -- and every one of those passers is a point guard except Griffin.

"It can only get better from here," Drummond said after that win. "With his addition, it's just been a lot of fun. He's able to handle the ball, he's a great playmaker. He's doing a great job of adjusting right now. We didn't really understand what was going to happen when we first got him. We didn't know how long it was going to take for him to adjust, but him being the professional that he is, he adjusted very quickly."

It's downright weird to see Griffin's No. 32 transposed as No. 23 on a different royal blue and cherry red uniform, but the package is fundamentally the same -- the same thick arm in the air guiding the pass-out, the same upfake, the same petulant intensity as he rams his way inside from the foul line. During his first 10 days in Detroit, there have been moments when, squint just enough, and you can see DeAndre Jordan's silhouette where Drummond is catching and dunking.

It's also strange to see Griffin in a Pistons jersey because he spent nearly a third of his life as not just the face of the Los Angeles Clippers, but the embodiment of every hope of the franchise and its fan base. From the moment the Clippers landed the No. 1 pick during halftime of a Cavs-Magic conference finals game just days before Van Gundy's Orlando team advanced to the NBA Finals, Griffin was the Exorcist, delivered to the Clippers' doorstep to rid them of their station as the worst franchise in professional sports.

Before Griffin's arrival in Los Angeles, tumbleweeds blew through Staples Center when the Clippers were the home team. His star potential made it possible for the team to bid for Chris Paul in 2011 and, in 2012, Griffin became the first Clipper ever to rank in the top 10 in NBA jersey sales. He was confrontational on the floor, which was a boon for a team that had been an historic doormat. And he was fully invested in the work of rebranding the franchise as a cool, charismatic countercultural product. Lest anyone forget, "Lob City" was a Griffinism.

Griffin was so many things to the Clippers -- the avatar of a brighter future, the organization's first bona fide superstar, a five-time All-Star who was a fixture in the most successful run in franchise history. But for a new owner and management team, he was also one of the last vestiges of a past from which the Clippers are still trying to distance themselves.

Nothing Donald Sterling did can be laid at Griffin's feet. Griffin didn't assemble the atrocious supporting casts around the Paul-Griffin-Jordan-JJ Redick nucleus. And the odd dynamic that plagued the Clippers' core during his time in Los Angeles was a collective failure. The Clippers clearly agreed when they produced their elaborate "Clipper For Life" free-agent presentation last July in an effort to retain his services, which they did to the tune of five years totaling nearly $175 million.

But after a string of injuries this season that derailed expectations -- culminating with another one to Griffin himself -- the Clippers began to measure a future with Griffin that looked decent against one with greater unknowns but more possibility. They wanted more runway, and there's only so much front office jiu jitsu an organization can do when it's paying a power forward on the wrong side of 30 an annual contract on the wrong side of $30 million for several years.

So when Detroit made an offer that allowed the Clippers to get younger and more financially flexible, they jumped. Sources close to the process say management could've handled the channels of communication with Griffin with a bit more grace, with Griffin having to make a call to the front office to glean any information from management on the day of the deal once rumors started percolating. Asked if they could've done better, the front office declined to comment on the sequence of events "out of respect for Griffin's privacy."

In contrast to the Clippers, Detroit is all history and franchise mystique, right down to the reclaimed analog team logo that screams Bad Boys. Stardom, charisma, playmaking and consistent production appear very appealing for a franchise that hasn't won a playoff game since the George W. Bush administration. Griffin might be flawed, tarred by the underachievement and toxicity of ClipperLand, and not much of a rim protector. But strip away the narratives and the pathos, and he is an effective triple-threat who pressures the rim, controls tempo and scheme, and has transformed his game every season since he entered the league.

In less than two weeks, a Detroit offense that has been beset by rigor mortis in recent years has discovered a new flow, and Griffin has been the catalyst. Now he will again try to deliver hope to a dormant franchise, this time as a middle-aged NBA player in an entirely different set of circumstances. It might be an unfair request, but such are the trials of Blake Griffin.

The Clippers, meanwhile, hope Griffin loses every game this season as a Piston, Friday night most of all, so they can best optimize the first-round draft pick they acquired in the deal. After all, business is business and the video tribute next winter can apply a salve on any wounds between franchise savior and franchise. Few individual legacies can be understood instantly, and it will be years before the Clippers and their fans know whether Griffin's tenure in Los Angeles represented the franchise's liberation from NBA hell or whether he personified a team with great promise that was defeated by self-inflicted wounds.

Griffin taking Motor City to new level
Blake Griffin brings a new dynamic to Detroit, leading the team in PPG and APG in the four games since being traded. Check out Griffin when the Pistons take on the Clippers on ESPN Friday at 7 p.m. ET.