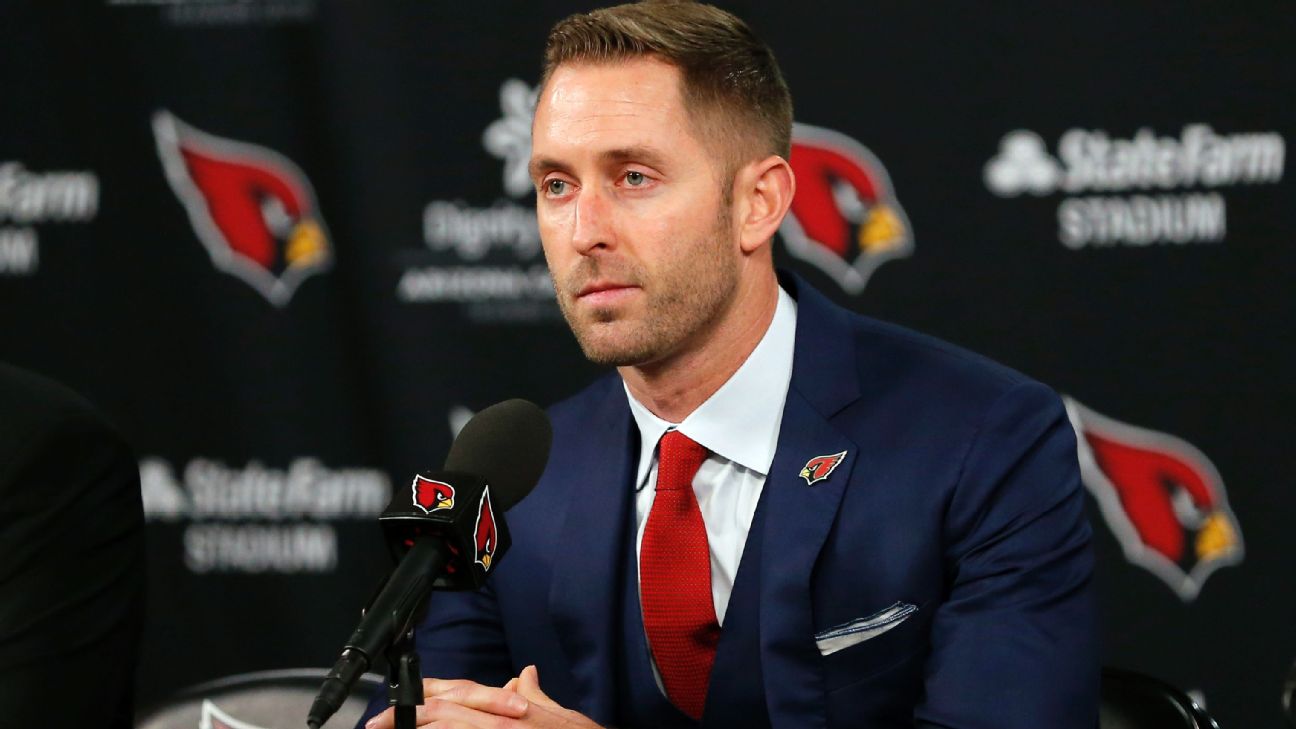 TEMPE, Ariz. -- Kliff Kingsbury's first priority as the Arizona Cardinals' new head coach is to hire a staff, he said during his introductory news conference Wednesday.

He'll be starting from scratch, which has put his timeline in overdrive.

Kingsbury, a first-time NFL coach who was hired to replace Steve Wilks on Tuesday, didn't announce any members of his first staff but said he's working "closely" with and "leaning heavily" on general manager Steve Keim to identify potential candidates.

Kingsbury said he'll call the offensive plays, which he believes will help him start to build an immediate bond with quarterback Josh Rosen. But Kingsbury wants his offensive coordinator to be someone who can help him navigate his first foray into coaching in the NFL.

"I think the offensive coordinator will be somebody who will come in and help me mesh some of my ideas with some traditional things that they've done in the NFL, be a great leader of men and be able to handle a room, help me install different things," Kingsbury said. "We're in the middle of that process right now and excited about some of the names and the people we've talked to."

However, Rosen will be largely handled by Kingsbury, who played quarterback at Texas Tech and for three seasons in the NFL.

"I take a lot of pride in that position," Kingsbury said. "I played that position. I try to see it from their eyes. I've been very fortunate to be around a lot of talented players, and that's a big part of it. I think the biggest thing is see it from their perspective. I want to customize the offense to what they do best and make sure they understand me as a playercaller. I think that's worked to our benefit so far."

Cardinals team president Michael Bidwill said Kingsbury resigned from USC, which allowed his interview with Arizona to take place. The Trojans had hired Kingsbury on Dec. 5 as offensive coordinator.

Kingsbury talked with Rosen on Tuesday, but the two are limited by NFL rules in how much contact they can have before April 1, when the Cardinals can begin their offseason program.

Kingsbury has already watched all of Rosen's games from last season but said it's hard to evaluate film when he doesn't know what Rosen was coached to do, what his reads were or what kind of protection was called.

However, Kingsbury, who said he wants to understand what makes Rosen tick, has made one evaluation just from watching Rosen.

"Josh Rosen is incredibly talented, one of the most talented throwers you'll see," Kingsbury said. "A young player, obviously, that I'm excited to work with and develop. But as a pure thrower, it's hard to find a guy that throws it better."

As for the Cardinals' next defensive coordinator, Kingsbury already believes he and Keim "have some great candidates."

Whoever fills the opening will very likely be a veteran coach who runs a 3-4 scheme, Keim said. Kingsbury's vision for his defense is one that'll be aggressive and similar to the Cardinals' defenses "previous to last year."

"I don't think there's any doubt that a veteran coordinator would be ideal in this situation, and just based on our personnel, I think a 3-4 fit is what we're looking for. Certainly, with the edge rush that we have, to be able to play man-free on the backend. Again, it's catering to your strengths. There's no doubt in my mind that we have to find a defensive coordinator that can do that."

Kingsbury: Rosen 'one of the most talented throwers'
Kliff Kingsbury says his college experience will transfer to the NFL and "it's hard to find a guy that throws it better" than Josh Rosen.