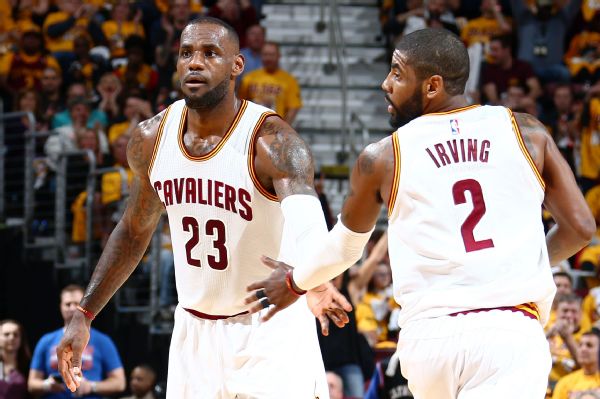 SACRAMENTO, Calif. --Cleveland Cavaliers general manager David Griffin said his team is not done dealing after acquiring Kyle Korver last week to boost the team's chances of a repeat title but that the Cavs might not be after the traditional point guard that many assume they covet.

"It's something where we're all pretty keenly aware that it would help take some burden off ofKyrie [Irving]and LeBron [James]as our primary playmaker, so ifwe could get somebody else that could do it ... and it really doesn't even have to be a point guard; it's just we need playmaking," Griffin said, speaking to reporters for the first time since the Korver trade.

"So, again, the hope is that Kyle gives us the opportunity to create some offense another way and make us less dependent on those two play creators. Obviously coach [Tyronn Lue] has done some creative things with Kevin Love to make offense run through him as well. But all season long, we've known we need more playmaking and just more intelligence at times on the floor in terms of the decision-making. We'll continue to try to improve."

Griffin said the Cavs have eyed Korver for a while and even made overtures to snag the one-time All-Star last season. Despite Korver's rocky start with the franchise -- 2-for-10 shooting in two Cavs losses -- the GM envisions big things for the 14-year veteran.

"He's sort of the perfect fit for a team that wants to play fast and shoot 3s," Griffin said. "His feel for the game and his ability to generate offense for us that isn't dependent on point guard play necessarily was important for us as well. You can run him off pin-downs and a lot of different actions that we didn't have the ability to run beforehand. The nature of his game lends itself to creating some other things."

Lue announced that Iman Shumpert, not Korver, will replace DeAndre Liggins in the starting lineup as Cleveland tries to shake a mini slump, losers of three of their past five games. Lue will play James alongside Korver more in the second unit, hoping to activate him.

Griffin explained some of the intricacies of the trade that sent Mike Dunleavy, Mo Williams and a 2019 first-round pick to Atlanta, particularly how Cleveland used a portion of its $9.6 million trade exception to bring Korver in and created two new trade exceptions covering Dunleavy's and Williams' contracts worth $4.8 million and $2.2 million, respectively, that will expire next January.

"The reason we did it is it's highly unlikely a team that's running our cap and tax numbers is going to be able to use the full bandwidth of that number, and the number of players that fit was really small in terms of people we had any realistic expectation we could acquire," Griffin said. "We wanted to do something where we reset the deck with a couple that were going to be usable for another year.

"It gives us the most flexibility that we can have moving forward into the summer. We've got a couple other [trade exceptions] that are going to expire in July. With the minimums [for NBA contracts] changing [in the new CBA] and everything else moving forward, it's going to be hard to use those small ones because I think they are probably going to be smaller than minimum, but [team counsel] Tony Leotti and [planning director] Brock Aller are just amazing with what they do and everything with cap space. Essentially that was their creation."

Cleveland also persuaded Portland to take the Cavs' 2017 first-round pick in exchange for the 2018 first-round pick it sent to the Trail Blazers in the Anderson Varejao trade last February. That allowed Cleveland to send its 2019 pick to Atlanta without violating the league's "Stepien Rule" that prevents a team from trading away future draft picks in consecutive years.

"We didn't want to incentivize Portland to do something like that because we really didn't have enough assets to move around, but if it made sense for them, it was something we were open to doing," said Griffin, who added that the Cavs' taking themselves out of the draft in June was tough, considering the strong group of prospects that figure to be available.

Griffin said the Korver acquisition gained urgency afterJ.R. Smith's right thumb surgery but that an additional point guard or playmaker might not follow in short order because of how competitive the standings are at this point.

There are 13 teams in the East and 11 teams in the West currently within striking distance of a playoff berth.

"Hopefully that picture clears itself up a little bit by the trade deadline," said Griffin, alluding to Feb. 23. "Maybe some teams that are still playing for right now may end up being in a situation where they start to set the deck for the future, but we need more teams to be out of the playoff picture to really be able to get business done."

Additionally, Griffin said he was "grateful" and can "appreciate" James' public call for the Cavs to add a point guard because "he's really trying to keep us moving in the right direction" but disagreed with James' desire to also find another backup big man to replace the injuredChris Andersen.

"I think his comment about needing a big, I'm not necessarily sure we're on that page, especially from the coaching staff's standpoint -- ironically because we like to play small with LeBron at 4 so much," Griffin said. "That may mean he doesn't like playing 4 so much, but we're awfully good when we play that way."