Clayton Kershaw's Game 5 start could be his last for L.A. 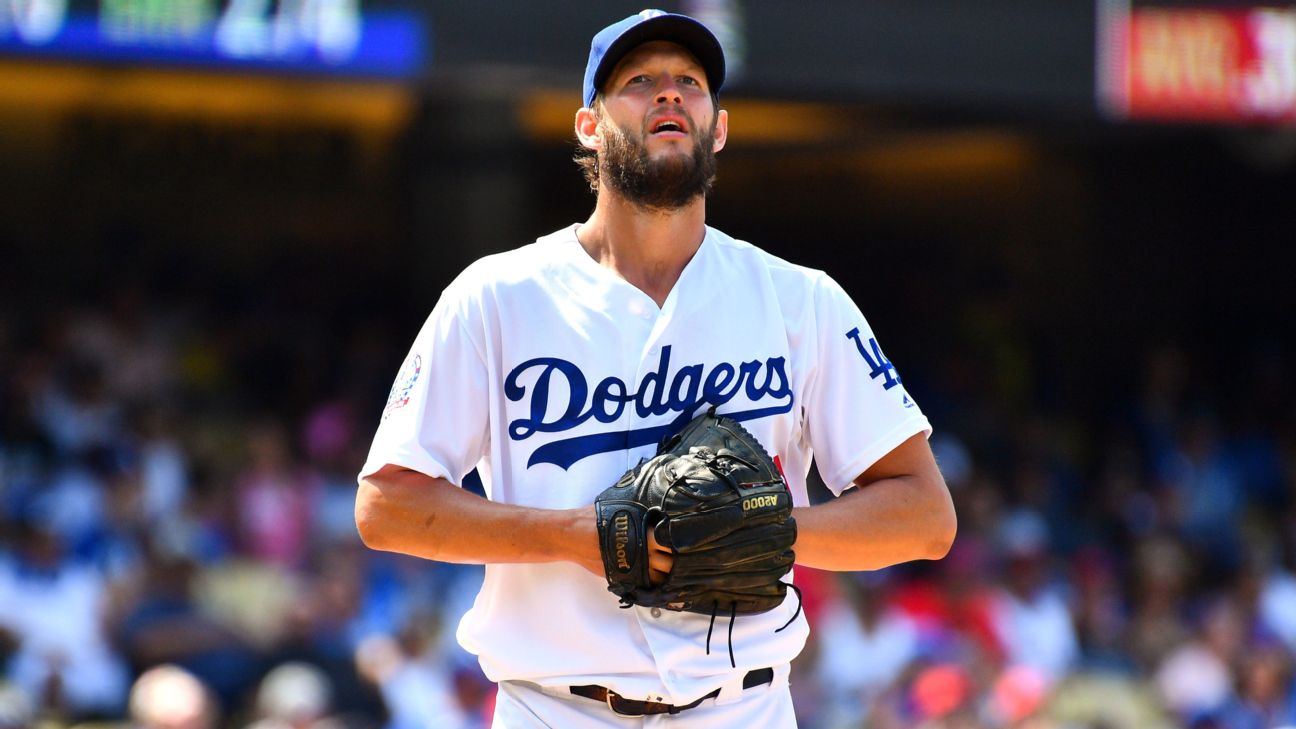 LOS ANGELES -- Every time Clayton Kershaw takes the mound the rest of this month -- however many times that ends up becoming -- the same question will linger in the background:

Kershaw can opt out of his contract at the end of the season and has yet to make a decision. If he does opt out, he will become a free agent for the first time in his career. And if that ends up being the case, he might -- might -- price his way out of a Dodgers organization that is now run by an exceedingly pragmatic group of executives.

The thought might seem implausible, but it was realistic enough for Kershaw to entertain the line of questioning on Tuesday afternoon, 24 hours before he would take the mound in Game 5 of the National League Championship Series against the Milwaukee Brewers.

Kershaw was asked what the Dodgers franchise -- the one that made him the seventh overall pick in 2006 -- has meant to him.

"I'm incredibly grateful," Kershaw said. "I'm just thankful that I've gotten to be here this long. I got drafted when I was 18; I got here when I was 20. From 20 to 30 -- that's a lot of growing years right there. I've gotten married, had two kids, played a lot of baseball, and really have grown up in this city. The only word that comes to mind is just grateful. I really am. It's been a great run. And whatever happens, I'll be thankful for that. Always."

Foremost on Kershaw's mind will be Wednesday's 5:05 p.m. ET first pitch, when he once again confronts the Brewers, this time with the series tied 2-2. The Dodgers pulled off a five-hour, 13-inning win late Tuesday night on a single by Cody Bellinger, and must win again Wednesday to avoid having to take two straight in Milwaukee to move on to the World Series.

Kershaw pitched masterfully in Game 2 of the NL Division Series against the Atlanta Braves, then struggled in Game 1 of the NLCS, from eight shutout innings on 85 pitches to nine outs -- and five runs -- on 74 pitches.

This is life on the barrel.

Kershaw's fastball velocity is down to the low 90s, a product of persistent back issues and an astronomical workload. He managed a 2.73 ERA during the regular season. But his swing-and-miss percentage (23) was down nearly 10 percentage points from just three years ago, and his strikeout rate (8.6 per nine innings) was the lowest since his rookie year in 2008. Kershaw has struck out a combined five batters in his two postseason starts, which means a lot of balls in play -- and a lot left to chance.

What ultimately matters, Kershaw said, is "the efficiency in getting outs."

"There is a ball-in-play component," Roberts said, "but I also think there's a quality of contact. ... He expects himself to execute. And when you're sequencing the right way, and when you're executing, there's punch in there. Probably not as much as there has been in the past, but there's soft contact. And those are outs, typically. So when he's right, he's still going to log outs. And that's the No. 1 goal that I know that he wants -- to get outs."

Kershaw has recorded outs in ways few Dodgers, if any, ever have.

Among those who have logged at least 1,500 innings for the Dodgers, he ranks second to Jeff Pfeffer -- a man who pitched before the Great Depression -- with a 2.39 ERA. He ranks seventh with 153 wins and 12th with 2,096 innings, all while making seven All-Star teams, winning three Cy Young Awards and claiming an MVP.

Now he has ventured into another stage in his career, with fewer fastballs and more pitches on the outer edges of the strike zone.

"It's why players stay great -- because they change, they evolve, they adapt," Brewers manager Craig Counsell said. "And a true sign of a major leaguer that lasts and excels is that you have to be able to adapt because eventually physical skills change, the league adjusts to you, and you've got to be able to make adjustments back and kind of learn on the fly."

The only blemish on Kershaw's record is a big one -- his success, or lack thereof, at this time of year.

The Dodgers were crowned division champions for the sixth straight season and are in the NLCS for the third straight October, but the franchise still is searching for its first World Series title since 1988.

Kershaw has heard a lot about that.