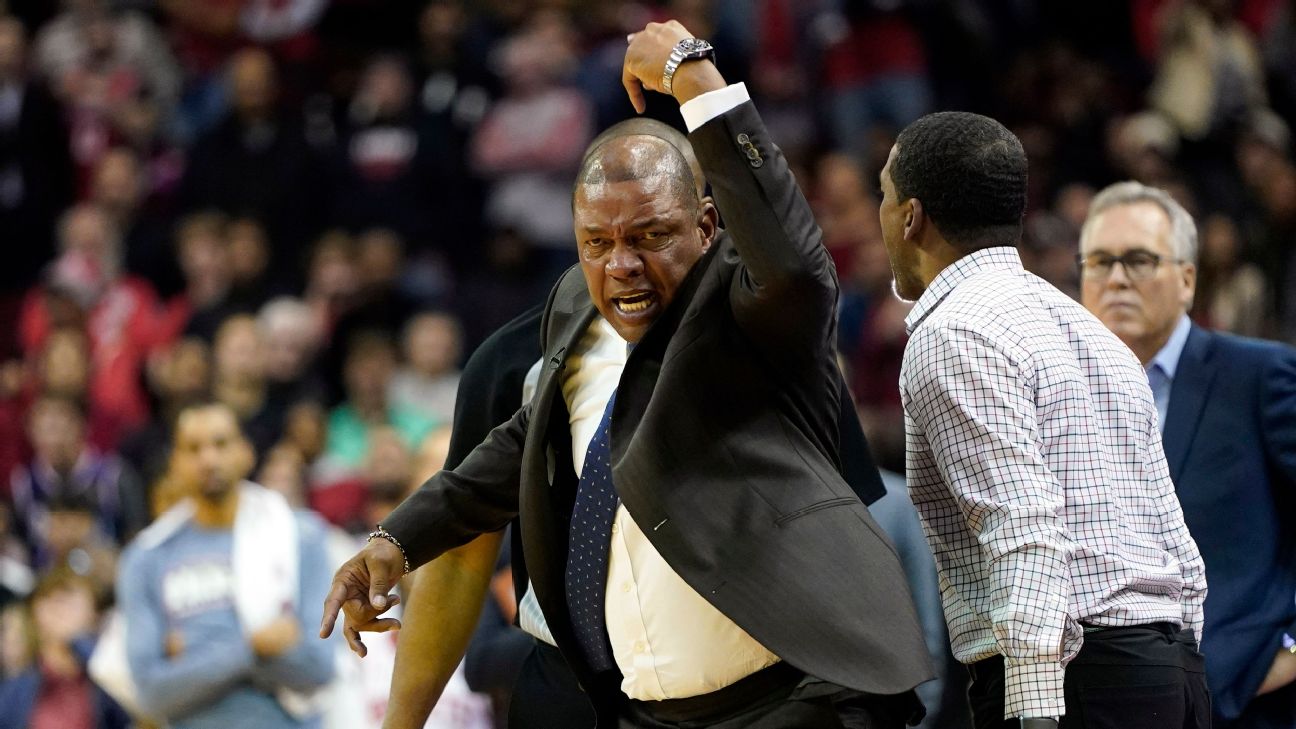 HOUSTON -- LA Clippers coach Doc Rivers was ejected for arguing with official Tony Brothers at half court on Wednesday while his son, Houston Rockets guard Austin Rivers, laughed and signaled for the officials to give his father a technical foul.

As Doc Rivers was walking off the floor to the locker room, Austin Rivers appeared to thoroughly enjoy the moment, celebrating by waving on the Houston fans to cheer louder before motioning to his father to call him by pretending to hold a phone to his ear. The comical Rivers father-son moment came with 1 minute, 31 seconds remaining in the fourth quarter of the Rockets' 102-93 victory over the Clippers.

"I did," the Houston guard said, smiling, when asked if he enjoyed the two technical fouls on his father. "I knew it was coming. I could see it. I've seen that look before -- many times. Once he starts blinking his eyes fast, and he starts [imitates Doc getting mad], that's when I know he is about to level up. So I just started telling Tony to get him. They got him. He's out of here."

The Clippers' head coach explained that his ejection came after a bizarre situation involving the new coach's challenge rule. Clippers forward JaMychal Green was driving toward the basket when he lost the ball. It appeared that Rockets guard James Harden poked the ball out of Green's hands. Green then collided hard with Houston center Clint Capela, who lay on the floor for several minutes before heading to the locker room. Capela was being evaluated for a concussion after the game.

After the Rockets called a timeout while Capela was being attended to, the Clippers called for a timeout to challenge the call that the ball went off Green for a turnover with 4:35 left in the game.

Doc Rivers said he was told by two officials that even though his challenge was correct, he took more than the allotted time to officially ask for a challenge. That's when confusion set in for the Clippers.

"The refs screwed up," Rivers said. "I made a challenge. They actually said I was right in the challenge, but that I took over the 30-second time to call it. So then two refs walked over to me and told me that that means you don't win the challenge. But you get your timeout back. The arena actually put the extra timeout back up on the board. So we think we have two timeouts. I think [we have two timeouts] because two refs actually walked over to me and told me, told all of our assistants and told our players."

When Rivers called for a timeout later in the game, with the Clippers down seven with 1:31 remaining, he said Brothers informed him that was his final timeout. Rivers then walked to half court to tell Brothers that he was told by the other officials that he had two remaining before pleading for the pair (Tony Brown and Derek Richardson) to come over from where they were standing to confirm with Brothers -- to no avail.

During that timeout, Clippers guard Patrick Beverley, who had already fouled out, was given a technical foul by Brothers. Then Rivers was given two technical fouls and ejected. Harden made three technical free throws to push the Rockets' lead to 10.

Brothers told a pool reporter after the game that Rivers was indeed told that he would not be assessed the timeout on the previous would-be challenge.

"After it was determined the Clippers could not challenge the play, they were incorrectly informed they would retain their timeout," Brothers explained. "After [Rivers] was told that he lost his timeout during that challenge, as you can expect, he became upset, and he was given an opportunity to try to get his composure, but it didn't happen.

"He came out onto the floor when we wanted to start resuming play. He was given a technical foul. The first one, he says, 'I don't care.' And he continued to stay on the floor, and so he was given a second technical and ejected."

No one seemed more delighted than Austin Rivers, who got a good laugh at his dad's expense.

"I was just trying to help out the situation," Austin Rivers deadpanned. "Listen, guys, I don't ever like to escalate anything. Y'all don't know me for that. I've always been a peacemaker. That's just 100 percent Doc's gotta keep his cool."

When asked if this will make things awkward around the holidays, the Rockets guard responded, "I doubt we'll go to dinner or anything like that."

"He actually is sensitive about stuff like that, so we'll see what happens," the younger Rivers said. "I love him. It was a really good moment, though. I enjoyed it a lot. I'm not going to lie to you: I really did enjoy that. It was fun."

There didn't seem to be any hard feelings on the elder Rivers' part, as Doc later responded to his son's Instagram post of the moment with a "hilarious.... Love you."

Doc Rivers said he noticed his son calling for him to get a technical foul, that "he should" and that he "didn't care."

The head coach's measured displeasure was focused on the officials.

"Now, listen, I'm fine with that if they had told me," Rivers said of having only one timeout instead of two. "But the officials can't tell me that I get my timeout back and then have me use it and then tell me after the fact, you don't have it. ... Those mistakes cannot happen. What bugged me the most is the two officials who told me, they ran over away. They just let Tony Brothers handle it. I mean, c'mon. You can't do that. You can't do that in a four-point game. That can never happen. Can never happen.

"There was a lot of griping all game, so my guess is they were tired of all of us. But when you make a mistake like that, you can't then throw the coach out. Like, you gotta own up to your mistakes. We own up to ours. We didn't play good basketball. I gotta do a better job with our offense. I'm owning up to it. They should own up to it as well."

Beverley griped about the foul calls going against the Clippers, as Harden went to the line 17 times, three more times than the entire Clippers team.

"I don't think we let it go away," Beverley said of the loss. "I think down the stretch there were some tough calls that obviously I feel like that weren't the right calls. I'm not here to challenge any referees, but if you watch the tape -- JaMychal Green tip ball goes out of bounds, my sixth foul at half court, out of bounds, fouled out. Kawhi [Leonard], every time he drive, he gets fouled, no one calls.

After the game, Austin Rivers said he doesn't think his father will hold this against him.

"Nah, he won't hold a grudge," the guard said. "He's been thrown out plenty of times before, and I'm sure he will be thrown one or two more times again. I mean, I just saw it coming. You could see where the game was going. We kind of had the game pretty much won at that point. It just happened fast.

"I was just trying to get him a tech, really. It could have been anybody I would have done that with, but it was him, and it's turned into this. So yeah, that's it." 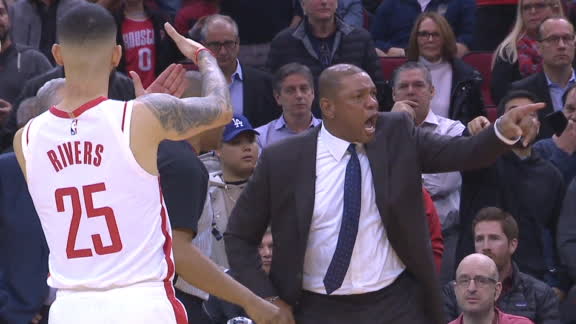 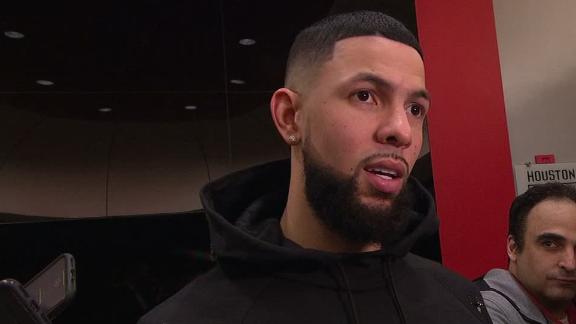