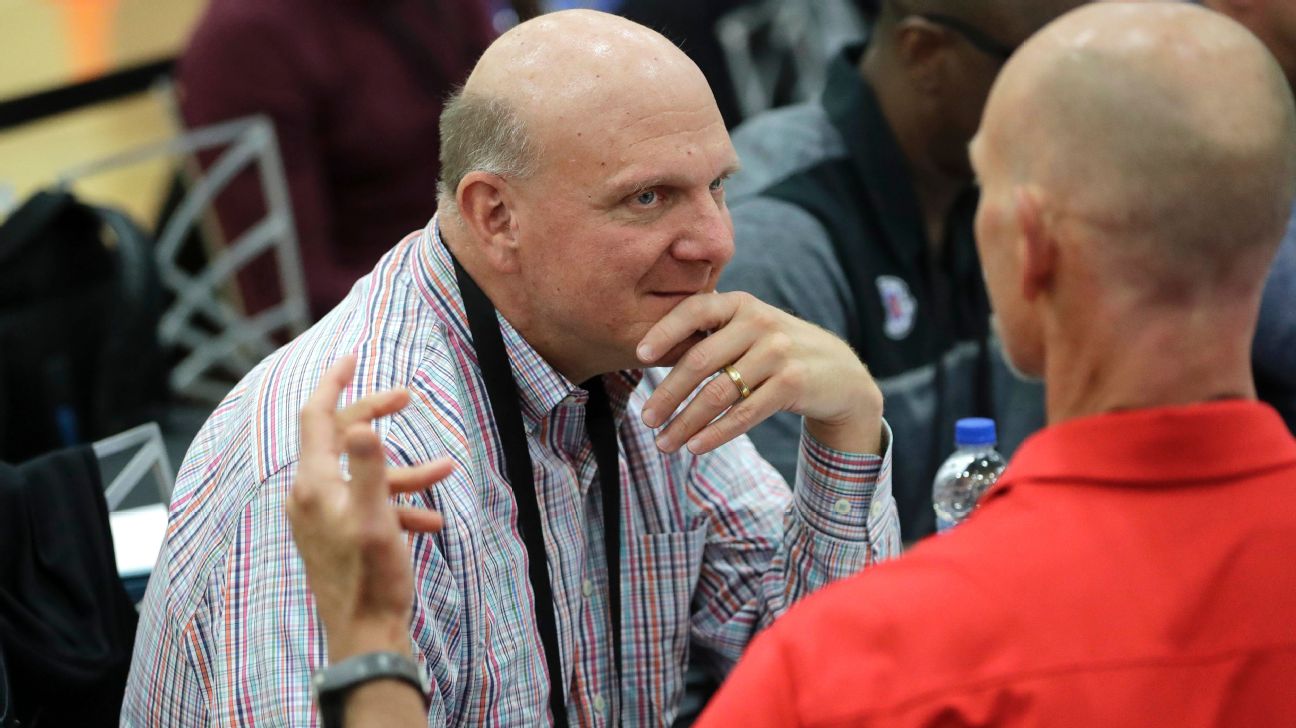 LOS ANGELES -- In another demonstration of the NBA's technological and analytics revolution, the LA Clippers on Wednesday unveiled a platform that makes multiple streams of augmented game viewing available, the first of its kind among professional sports in North America.

"What we have today is what I would call an augmented-reality interactive view of a game," team owner Steve Ballmer said. "And that's fantastic."

Working with Second Spectrum, a company that has developed technology that integrates video, tracking data and analytics with machine learning, the Clippers created the CourtVision product. In addition to the flagship broadcast of the game, users will have a choice of three additional streams that essentially function as optional channels.

"If nothing ever changes, how do you ever create experiences for the fans?" Ballmer said. "Why not try this?"

The "Coach" view will diagram specific plays on the screen as they materialize during the possession. The "Player" view is an analytics-driven experience that will indicate the probability of a successful shot over the head of each player based on his position on the floor at a given moment -- percentages that change dynamically in each instant. The "Mascot" view gives viewers more light-hearted animated features that celebrate events like 3-pointers and slam dunks.

"We think everyone will watch sports this way," Second Spectrum CEO and co-founder Rajiv Maheswaran said. "There will be a day when you look back and say, 'I can't imagine we all used to watch the same thing at the same time -- that seems silly.'"

The product will be available to viewers in the Los Angeles market through a Fox Sports application, with plans to finalize a more dedicated application, which is currently available in only a beta version. Second Spectrum has a contract with the NBA; some 28 of the league's 30 teams are subscribers to its service, and it owns the intellectual property that propels the technology.

As the product launches, the streaming feeds will have a delay of approximately two minutes behind the live broadcast. Ballmer insisted that the two-minute latency will be reduced in the near future. He also allowed for the idea that as sports gaming comes into the mainstream through legal channels, an augmented feed catering to gamblers could potentially be developed.

Ballmer, who is an investor in Second Spectrum, has been particularly aggressive in his aspirations for "over-the-top" services that would eventually phase out traditional broadcasts in favor of a more personalized viewing experience. As the Clippers' most recent local broadcast deal came up for renewal in 2016, Ballmer expressed a desire to retain many of the digital rights in order for the Clippers to launch their own OTT platform.

But after examining the landscape, where the majority of fans still rely on traditional viewing outlets, the Clippers ultimately agreed to a renewal of their agreement with Fox Sports Prime Ticket for approximately $55 million per season.

"Excitement met reality," Ballmer said. "A lot of our customers get great value out of the traditional broadcast, and one of our key issues was to work through our partnership with Fox to make sure that it was a win-win."

Ballmer conceded that encouraging fans in attendance to watch an augmented view of the action on their phone could divert their attention and compromise the purity of the live game. But he said that the existence of the technology was an incentive for the organization to enhance the arena experience.

"As we design our new arena, can we make sure those seats and views -- we can make those exciting, so compelling that we keep people from just having their noses in their screens," Ballmer said.

The Clippers' lease at Staples Center expires in 2024, and Ballmer has been adamant that his franchise needs to own its own facility to take full advantage of revenue streams, as well as innovative technology. The Clippers have proposed construction of a complex in Inglewood.
Report a correction or typo
Related topics:
sportsespnsteve ballmerclippersla clippersaugmented realitynba
Copyright © 2020 ESPN Internet Ventures. All rights reserved.
More Videos
From CNN Newsource affiliates
TOP STORIES