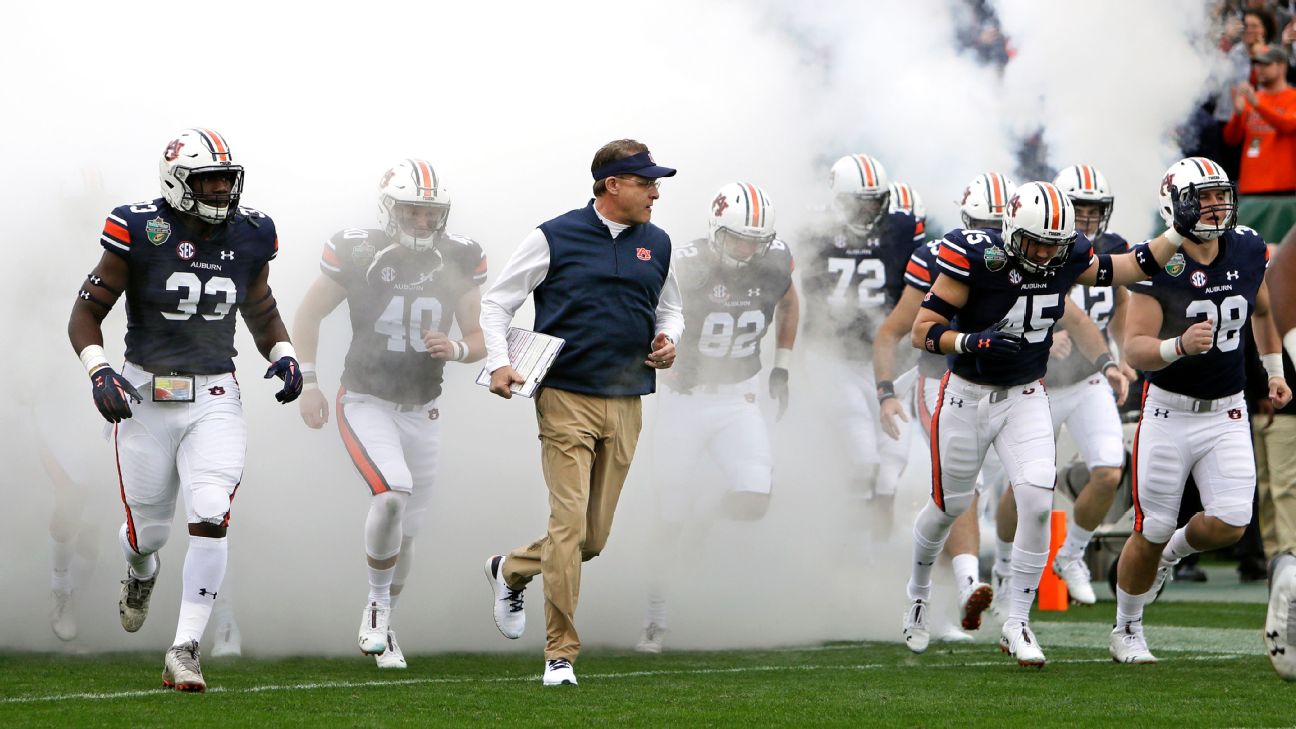 The absolute most important thing to understand any time you're previewing the upcoming college football season, and especially when you're doing a deeper dive on schedules, is that "ain't nobody playing anybody."

It's a time-honored phrase and one coated in its own vernacular depending on where you reside and what team you live and die with every fall Saturday afternoon. It's also a phrase that will invariably reach a crescendo come College Football Playoff selection time in December.

Until then, we'll hand out a few preseason superlatives when it comes to the 2019 college football schedule, some to be proud of and some sure to cause considerable angst. As the Head Ball Coach, aka Steve Spurrier, used to say (quoting his old coach Pepper Rodgers), a coach is only as good as his players and his schedule.

And maybe there's something to that because the two teams that played for the national championship a year ago --Alabamaand Clemson-- combined to face just five Power 5 teams that managed more than eight wins during the 2018 regular season. The Crimson Tide and Tigers also combined to produce 16 selections in the 2019 NFL draft, including eight players taken in either the first or second round.

Now, on to our selections:

A handful of schools could make cases, particularly South Carolina, but nothing rises to the level of the gantlet staring Gus Malzahn and Auburnin the face this season. The Tigers face six of the top 12 teams in ESPN's latest Way-Too-Early preseason rankings, and four of those games are away from home. The Aug. 31 opener is against No. 10 Oregonin Arlington, Texas, followed by true road games against No. 12 Texas A&Mon Sept. 21, No. 8 Floridaon Oct. 5 and No. 9 LSUon Oct. 26. Of course, the "good news" is that Auburn returns home for its November grind ... against No. 3 Georgiaon Nov. 16 and No. 2 Alabama on Nov. 30. The proverbial hot seat has become all too familiar for Malzahn. When is it not for the head football coach on the Plains? But with a schedule like this, Malzahn's seat just got hotter -- if that's possible.

Justin Fuente could use a big season, and Virginia Tech'sschedule looks like it just might cooperate. The only game against an opponent ranked in ESPN's latest preseason rankings comes on the road against Notre Dameon Nov. 2, but the Hokies have an open date the week before playing the Irish. Moreover, they won't have to leave the state of Virginia for five of their last seven games. And, oh yeah, they avoid Clemson, NC Stateand Syracusefrom the ACC's Atlantic Division during the regular season. After winning just six games a year ago, Virginia Tech's pathway to double-digit wins in 2019 doesn't look all that unrealistic.

As an FBS independent, scheduling can be tricky for BYU, but the Cougars should be in for a wild ride -- one way or the other -- in 2019. Not only are they the only team in college football to open the season against four straight Power 5 opponents (Utah, Tennessee, USCand Washington), but those four games all come in successive weeks. The caveat is that the Aug. 29 opener against Utah is a Thursday night game. The folks in Provo are going to love the home schedule. In addition to Utah, USC, Washington and Boise Stateall come to LaVell Edwards Stadium.

Toughest open to the season

Stanfordplays six straight weeks to open the season before getting a bye, and three of those games are against teams in ESPN's preseason rankings. The Cardinal open with Northwesternat home on Aug. 31, then face USC and UCF on the road in back-to-back weeks, return home to face Oregon on Sept. 21, play at Oregon Statethe next week and then come back home to face Washington on Oct. 5.

Toughest close to the season

This was an easy call. Boston Collegeends the season with four road trips in its last five games, and the only home game in that stretch is against Florida State. The Eagles travel to Clemson on Oct. 26, travel to Syracuse on Nov. 2, face FSU at home Nov. 9, and then after an open date, travel to Notre Dame on Nov. 23 and to Pittsburghon Nov. 30.

Cushiest open to the season

Ohio Statefaces Florida Atlanticand Cincinnatiat home to open the season, then travels to Indianaand comes back home to face Miami (Ohio). Pretty safe bet that Ryan Day and the Buckeyes will be 4-0 going to Nebraskaon Sept. 28.

Cushiest close to the season

Kentuckycloses the season with a November that has a distinct Volunteer State flavor to it, and three of the four games are at home. Tennessee on Nov. 9, UT-Martin on Nov. 23 and Louisvilleon Nov. 30 will all come to Kroger Field. The only away game is against Vanderbilton Nov. 16. None of UK's four November foes finished with a winning record a year ago.

Take your pick between Texas A&M and Michigan Stateas to which Power 5 school plays the toughest road schedule in 2019. The Aggies play at Clemson on Sept. 7 and then close the season with road games against Georgia on Nov. 23 and LSU on Nov. 30. Meanwhile, the Spartans play at Northwestern on Sept. 21, at Ohio State on Oct. 5, at Wisconsinon Oct. 12 and at Michiganon Nov. 16.

Does anybody have an easier slate at home this season than Virginia Tech? The Hokies faceOld Dominion, Furman, Duke, Rhode Island, North Carolina, Wake Forestand Pitt in Blacksburg. Then again, it's not like Alabama is overextending itself at home this season, either. The Crimson Tide face New Mexico State,Southern Miss, Ole Miss, Tennessee, Arkansas, LSU and Western Carolinain Tuscaloosa.

The Big Ten gets the "award" for having the most teams not playing a Power 5 opponent or Notre Dame during the nonconference portion of their schedules. Illinois, Indiana, Minnesota, Ohio State and Wisconsin all fall into that category.

Boston College is the only Power 5 school playing three nonconference games against a Power 5 opponent or Notre Dame. The Eagles face Kansasat home and Rutgersand Notre Dame on the road.

Beast of the East

Alabama returns to South Carolina on Sept. 14 for the first time since 2010, when Steve Spurrier, Stephen Garcia, Alshon Jeffery and the Gamecocks ambushed the No. 1-ranked Crimson Tide 35-21. Not only was that the last time Alabama lost to an SEC Eastern Division team, but it's the only time a Nick Saban-coached Alabama team has lost to an SEC opponent by 14 points or more. Alabama is 68-8 against all SEC opponents since that loss.

UCLAventures outside of Los Angeles only twice during the months of October and November, to face Stanford on Oct. 17 and Utah on Nov. 16. The Bruins play at USC on Nov. 23, but that game is at the Coliseum.

Coloradowill open the season with three consecutive games against in-state or traditional rivals --Colorado Statein Denver, Nebraska in Boulder and Air Forcein Boulder. Thanks to some ace research by Colorado's David Plati and his staff, there are only 13 other instances in which an FBS school has opened the season against two straight rivals since 1971, when 11-game schedules came into being. Plati and his crew could not find an instance of an FBS school opening with three straight rivals. This will be the first meeting between Colorado and Air Force since 1974.

On the road again

In just under a five-week span from Sept. 21 to Oct. 17, UCLA plays three true Pac-12 road games against Washington Stateon Sept. 21, Arizonaon Sept. 28 and Stanford on Oct. 17, which is preceded by an open date. Mississippi Statewill also be living out of its suitcase from Sept. 28 through Nov. 2. In those six weeks, the Bulldogs will go on the road to face Auburn on Sept. 28, Tennessee on Oct. 12, Texas A&M on Oct. 26 and Arkansas on Nov. 2. They get an open date on Oct. 5, so four of the five games during that stretch are on the road.

No backing down for Holgo, Houston

As Dana Holgorsen embarks on his first season at Houston, the Cougars are taking on all comers. They open the season by playing at Oklahoma, then face Washington State two weeks later in the AdvoCare Texas Kickoff at NRG Stadium. Three of their first four games are on short weeks, giving them four games in 19 days.

Which Power 5 teams could get tripped up by Group of 5 teams? Among the possibilities: Oregon faces Nevadaon Sept. 7, a week after the Ducks open the season against Auburn. North Carolina faces Appalachian Stateat home on Sept. 21. Mack Brown started his head-coaching career in Boone. Wake Forest opens the season on Aug. 30 at home against Utah State. Stanford plays at UCF on Sept. 14, and Pitt takes on UCF at home on Sept. 21.

Staying in the sunshine

The drive from Stanford University to Spectrum Stadium, where UCF plays its home football games, is 2,880 miles. Fortunately for the Cardinal, they won't be driving for that Sept. 14 affair. Nonetheless, that's a mighty long way to go for a football game.

There are some intriguing matchups the first three weeks of September, including LSU at Texas, Texas A&M at Clemson, Armyat Michigan and Stanford at USC on Sept. 7. On Sept. 14, Stanford plays at UCF, Oklahoma plays at UCLA, and Clemson plays at Syracuse. Then on Sept. 21, Notre Dame travels to Georgia, and Michigan travels to Wisconsin.

Pitt goes the first five weeks of the season without leaving the state of Pennsylvania, although one of the games is at Penn Stateon Sept. 14.

ACC foes Wake Forest and North Carolina will play Sept. 13, but it won't count as a conference game. Each team has only three other nonconference games.

Deep in the heart of Texas

Texas plays only one game outside the state (at West Virginiaon Oct. 5) until it travels to Iowa Stateon Nov. 16. The Longhorns have a "road" game against Riceat NRG Stadium in Houston on Sept. 14, the Red River Rivalry against Oklahoma in Dallas on Oct. 12 and a game against TCUin Fort Worth on Oct. 26.

Kent Stateis hoping to improve on a 2-10 season in Year 2 under Sean Lewis, who at 33 is the youngest FBS head coach. The Golden Flashes' nonconference road schedule won't be of much assistance. In their first five games of the season, they play road games at Arizona Stateon Aug. 29, at Auburn on Sept. 14 and at Wisconsin on Oct. 5.