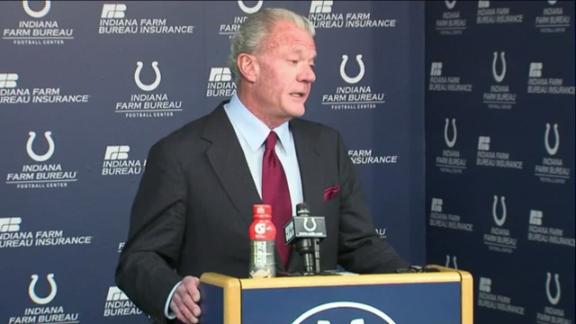 INDIANAPOLIS -- The Colts' general manager search will not include former quarterback Peyton Manning.

Owner Jim Irsay said Saturday that Manning, who spent 14 seasons with the Colts, is not in the "picture" as a possible replacement for the fired Ryan Grigson.

"Right now it's something where he's not in the mix in this process for interviewing general managers," Irsay said. "... Peyton and I have talked through the last year when he came in for the 10th anniversary reunion. Him and I sat and had some time to talk alone. I said I'd be happy to be a sounding board for him, asking him what he was thinking about going forward with his career and that sort of thing. But there was never any serious negotiations or anything like that for him coming in to be general manager."

Manning threw for 54,828 yards and 399 touchdowns with Indianapolis, leading the Colts to 11 playoff appearances and a Super Bowl title in 2006. Indianapolis released him in the spring of 2012 after he missed the 2011 season with a neck injury.

Irsay didn't rule out the possibility of Manning joining the franchise in some capacity in the future.

"I welcome the opportunity for him, and I talk about that possibility someday that he would play some role in our organization," Irsay said. "You have to remember it hasn't even been a year since the confetti fell from his Denver Super Bowl victory, and he's enjoying retirement, enjoying the chance to not be down in the schedule and that sort of thing."