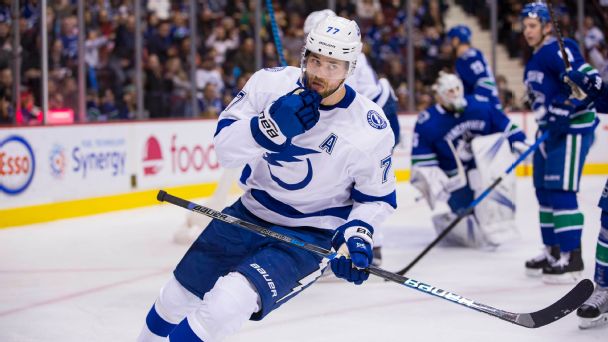 Who should win the Norris Trophy?

Emily Kaplan, national NHL reporter:The Norris has only been won by eight men over the past 16 years -- we mostly blame seven-time winnerNicklas Lidstrom for that. Even still, 2018 feels like the year of fresh faces, as we're not talking about the usual suspects. Duncan Keith is unequivocally having an off year. Erik Karlsson has been solid, but it's hard to justify his candidacy as the Ottawa Senators have floundered and he has eased his way back from an ankle injury. Recent winners Brent Burns, Drew Doughty and P.K. Subban have all had great seasons, and are ballot-worthy. But the problem is that we can throw them into the mix of at least 10 deserving candidates, which also includes John Carlson, Shayne Gostisbehere, Victor Hedman, Seth Jones, Roman Josi, John Klingberg and Alex Pietrangelo.

I keep circling back to Hedman. He is tied for seventh among defenseman in scoring, with 52 points -- despite playing five and six fewer games, respectively, than co-leaders Carlson and Klingberg (59). Hedman is also shouldering 25:56 minutes a game, and is tied for second among D-men in plus/minus rating, with a plus-26. (Although it's a flawed stat, it still stands for something). Hedman's Norris campaign is plagued by the same issue as teammate Nikita Kucherov's Hart Trophy case: They get less credit than they should because of the talent around them on their team. You could argue that Hedman is benefiting from goalie Andrei Vasilevskiy having a Vezina Trophy-caliber campaign as well as an offense that leads the league with 3.53 goals per game. But Hedman is having a terrific season in his own right, and should be rewarded for it.

Chris Peters, NHL prospects writer: This will be an agonizing vote when the time comes to make the final decision. As Emily noted, no fewer than 10 players have played at a high enough level for consideration. As much as I'd love to see a fresh name added to the Norris Trophy mix, I'm not sure it will happen this year. Hedman and Klingberg will probably get closest to breaking the trend, but I'm starting to believe that Drew Doughty will collect his second Norris Trophy -- and I'm also thinking he's the right choice.

Doughty, as usual, is logging massive minutes, taking an average of 30.7 shifts per game for an average ice time of 26:44, just five seconds per game less than league leader Ryan Suter. Doughty is also second among all defensemen in even-strength time on ice. All the while, Doughty remains a possession driver for theLos Angeles Kings,with a Corsi relative of 4.9 percent, and is second on the team in points with 54. He remains a do-everything defender and somehow seems to be getting better as he gets older.

There was much debate last time Doughty won the Norris, and it was valid because of what Karlsson did that same season. This time around, I think Doughty has a stronger case, but the field couldn't be more crowded. If the season ended today, Doughty would have my first-place vote, but I'd also have Klingberg, Hedman, Seth Jones and Subban on my ballot.

Sean Allen, fantasy writer:I'll give this a fantasy spin, but it's applicable to real-life award voting. Who wins the fantasy hockey version of the Norris Trophy this season? It's a three-horse race between Hedman, Subban and Dustin Byfuglien, but there's a heavy favorite here.

With ESPN's standard categories (goals, assists, plus/minus, PIM, power-play points, shots and average ice time), Hedman and Subban are separated from the pack, with Hedman actually out in front for overall value despite missing five games already. Byfuglien, however, isn't far behind despite already missing 12 games this season. In fact, on a per-game basis for fantasy value, Byfuglien easily leads the way, thanks to his 110-penalty minutes pace.

Setting aside PIM for the moment, Hedman's season really does stand out as exceptional. He's among seven defensemen on pace for 60-plus points, with none of them on pace for more than 67 right now. That puts him right in the thick of it for scoring. He's currently tied for fifth in power-play points from the blue line, only five back of co-leaders Carlson and Gostisbehere. With a small boost in shooting over the next two weeks, Hedman could finish in the top 10 for shots on goal among defensemen (he's currently on pace to finish 12th, three shots back of Alex Pietrangelo for 10th). He's one of only five NHL defensemen averaging 25:45 or more in ice time per game.

And then there's his plus/minus, which shines like a beacon of joy upon the fantasy wasteland that is the top defensemen this season. Between Karlsson's minus-24 and Burns' minus-18, Hedman's plus-26 is a saving grace for fantasy managers. Hedman is in the mix to lead all defensemen in plus/minus, depending on how Ryan Ellis and Patrik Nemeth fair between now and the season's end.

Even if we factor in some non-standard fantasy categories, Hedman still takes the cake. He is on pace for more hits than all 22 defensemen (not named Byfuglien) who are currently on pace for 45-plus points. And even though it's not his forte, Hedman willcrack triple-digits for blocked shots.