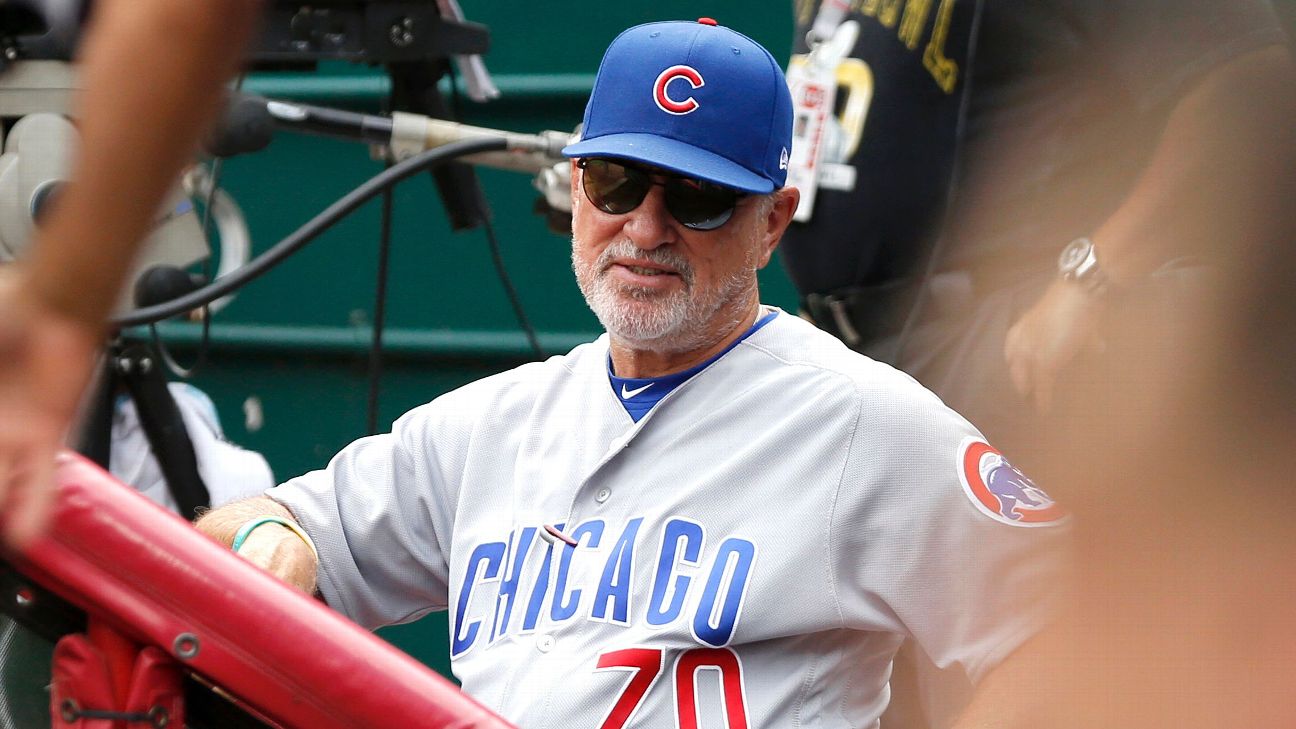 LOS ANGELES -- With their two best starting pitchers poised to throw, the Chicago Cubs limp into a four-game series with the Los Angeles Dodgers, the team that beat them in the National League Championship Series last October.

But before Jon Lester and Kyle Hendricks get to pitch for the Cubs, 23-year-old rookie Duane Underwood (2012, second round) will make his major league debut at Dodger Stadium on Monday, attempting to help the Cubs end a four-game skid. All four losses came at the hands of the Cincinnati Reds over the weekend, while the Dodgers were involved in a sweep as well, taking down the lowly Mets in New York.

The Cubs tried to say all the right things after losing to the Reds, including giving some respect to their opponent while reminding everyone of recent history.

"We went 0-6 on a road trip last year," manager Joe Maddon said. "It's called baseball. It's under the category of baseball, but while you're saying that, don't denigrate Cincinnati. This is an improved ballclub, and their pitching is way improved."

Like the Reds, the Dodgers are much improved after a rough April. Since beginning the season 12-16, the Dodgers are 29-22. Last week in Chicago, the Cubs took two out of three from Los Angeles in a tightly contested series, not unlike the past two playoff matchups between the teams. The Cubs beat the Dodgers in 2016 en route to their historic World Series championship, but they ran out of gas against Los Angeles pitching last October, falling in five games.

Both sides say they could see a Round 3 between the teams this October, but they have a lot of work to do before that can happen. It's a reminder that getting to the top of the mountain is tough, but staying there can be even tougher. Just ask Maddon after his team was swept by the last-place team in the NL Central.

"You can't be afraid to lose to win," he said. "It happens every year. That's when you really have to keep the group together and make sure you adhere to what you believe in. That's the test. You have to pass the test of staying together."

One difference between the Dodgers and Cubs is that Chicago has its championship, while Los Angeles is still trying to win one with its current group of players, led by the best pitcher of his generation,Clayton Kershaw, who makes his first home start Thursday since coming off the disabled list.

While Underwood makes his debut, Yu Darvish, whom the Cubs signed away from the Dodgers this offseason, will begin a rehab stint in the minors as he recovers from a triceps injury. Cubs star Kris Bryant is expected back in the series after missing time with a shoulder ailment. Both teams are dealing with injuries, but that won't be an excuse come September. Their payrolls and rosters won't allow for it. And both teams have too many star players to go meekly into the night.

"It's not just up to us," Bryant said when asked if he and Anthony Rizzo need to carry the team. "There's really not pressure on us, because our team is so dang good that it's almost relieving that you don't have to feel that, which is a great thing."

Kershaw and Justin Turner might feel the same way, as the Dodgers have become a more complete team over the past few years, while the resurgence of Matt Kemp has been a pleasant surprise.

As happens so often in baseball before a series begins, one team is feeling good about itself while the other is trying to find some consistency. Maddon is preaching what you'd expect after getting swept: calmness.

"We beat the Dodgers two out of three [last week] and we're the best team since the 1927 Yankees," he said over the weekend. "Then Cincinnati beats us ... and all of a sudden it's doom and gloom. I cannot live my life that way."

Neither team wants to ride the roller coaster, but with elevated expectations for both organizations, it's the new normal as a June series in Los Angeles is bound to feel like one in October.