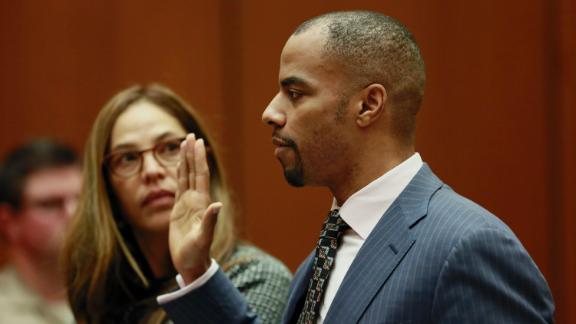 LAS VEGAS -- Former NFL star Darren Sharper pleaded guilty Tuesday in Las Vegas to a reduced felony attempted sex assault charge, in the third part of a four-state plea deal that prosecutors say will put him in federal prison for about nine years.

A plea agreement calls for Sharper to serve 38 months to eight years in prison for the Nevada conviction, but at the same time as sentences from California, Arizona and Louisiana.

On Monday, the 39-year-old Sharper pleaded guilty to sexual assault in Arizona -- again using an Internet hookup -- and no contest in Los Angeles to raping two women he drugged after meeting them in a West Hollywood bar.

Sharper is due in federal court April 6 in New Orleans, the city where he won a Super Bowl as a member of the NFL's Saints franchise. He's due in Louisiana state court 10 days later.

Sharper wore an orange jail uniform with "LA County" stamped over his chest pocket as he sat Tuesday in Los Angeles flanked by attorneys Blair Berk and Lisa Wayne.

One of his Las Vegas lawyers, Richard Schonfeld, appeared on his behalf -- first before a Las Vegas justice of the peace and then before Herndon.

The former All-Pro safety cleared his throat and said, "Guilty," when asked to enter his plea.

Sharper could have faced 20 years to life in Nevada state prison on two sexual assault charges filed against him last week in Las Vegas.

Those charges were dropped as part of the plea agreement. Prosecutor Craig Hendricks said he spoke with the two victims, both in their mid-20s, before terms of Sharper's plea deal were made public.

Sharper was accused of club-hopping with the women in January 2014 before taking them to his room at a Las Vegas Strip hotel, drugging them and raping them while they were unconscious.

Police and prosecutors characterized the Las Vegas case as weaker than in California, Arizona and Louisiana because the women didn't report the attack until after they returned home and heard about similar allegations against Sharper.

District Attorney Steve Wolfson said Tuesday he was satisfied that Sharper was accepting responsibility for his crimes in Las Vegas and the other states.

Sharper retired in 2011 after a 14-year NFL career as with the Green Bay Packers, Minnesota Vikings and the Saints. He won a Super Bowl in New Orleans.

One of his former teammates, Scott Fujita, called what has happened "disgusting."

"He was a great teammate, a great player," Fujita told TMZ. "But all that aside, it's disgusting and beyond repulsive.

"Look, I'm a dad of three daughters ... If he ends up only serving nine years, it's an absolute shame. It's way too short."

Sharper was working as an NFL network analyst when women began telling police in several cities similar stories of blacking out while drinking with him and waking up groggy to find they had been sexually abused.

His arrest came as the league dealt with off-field problems with players accused of crimes ranging from spousal abuse to murder.